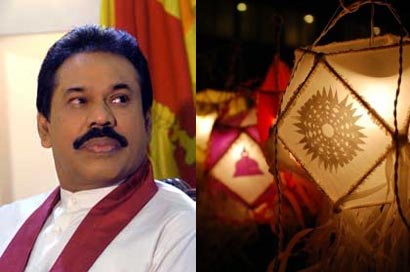 We celebrate the triple festival of Vesak that commemorates the Birth, Enlightenment and Parinirvana of the Buddha with State sponsorship that marks the great veneration and devotion of the people.

Vesak is the most meritorious festival of the Buddhists in Sri Lanka and the world over. We, who have protected Theravada, the purest form of Buddhism with great sacrifice through the centuries, celebrate this festival with the joyous feeling of the pervading presence of the Buddha.

The teaching of the Buddha is the greatest message of peace to the world. Buddhism has shown the world that while anger and hatred are causes for sorrow, Karuna – compassion and Maitri – loving kindness is the path to contentment. It says that all divisions based on race, religion, caste, and tribe are wholly meaningless and a person’s stature is best measured by one’s good or bad conduct. We stand out among the nations of the world as an ethical society where livelihoods are based on the teachings of the Buddha.

The teaching of the Buddha states: Na attahetu na parassa hetu  –  na puttamicche na dhanam na rattham Na iccheyya adhammena samiddhim attano – sa silava pannava dhammiko siya (One should not wish for a son, wealth or country for one’s own sake, nor for the sake of another. One should not wish for one’s prosperity through foul means. Such a man is indeed virtuous, wise and righteous.)

In a society nurtured by the teachings of the Buddha, our expectations are based in honoring the great teachings, as stated in these words from the Dhammapada. Hence, we strongly defend and respect the independence and dignity of others in the policies of State.

As those accustomed to lifestyles in the keeping with the teachings of the Buddha, our understanding is that living a single day with great determination in achieving merit is more valued than living otherwise for a hundred years. Therefore, let us in this season of Vesak, resolve with the least delay, to gather an abundance of merit for this world and the next.