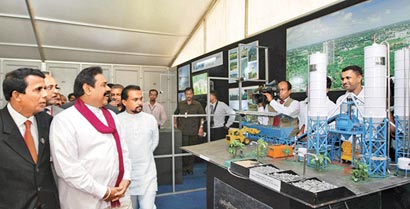 Construct 2011, the largest exhibition in the field of construction in Sri Lanka was declared open by President Mahinda Rajapaksa at the Sirimavo Bandaranaike Conference Hall in Colombo last morning.

This exhibition organized by the National Construction Association of Sri Lanka for the 11th time is attended by a number of local and foreign construction company officials.

A number of exhibition stalls depicting factors in constructing houses, highways and bridges are featured at this exhibition.

The exhibition to be held until August 21 will provide viewers an awareness on all types of constructions and technologies used in countries such as Malaysia, India, Pakistan and China.