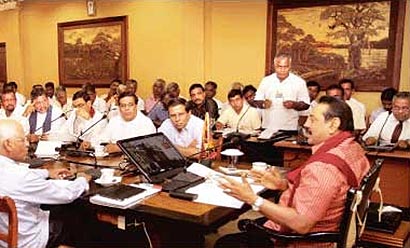 President Mahinda Rajapkasa yesterday instructed government officials to provide immediate relief and assistance to farmers affected by the drought. The President gave the above instructions during an urgent meeting convened yesterday to look into the difficulties faced by farmers of the North Central Province due to drought. It was attended by politicians, farmers, and government officials of the Anuradhapura and Polonnaruwa districts and ministry Secretaries.

President Rajapaksa on the occasion instructed officials to prepare a plan to provide immediate compensation to farmers whose cultivation has been affected by the drought.

He also appointed a special committee comprising officials from the Treasury, Irrigation Department, Agrarian Services and Wildlife Department, Agricultural Ministry and Disaster Management Ministry to look into the above.

After listening to the farmers’ grievances the President assured them, that the government will never let them down in their hour of need and the drought affected will be provided maximum assistance.

The President after being informed that the water levels in most tanks have gone down and also the capacity of some tanks has been reduced due to the gathering of sediment, instructed officials to take steps to dredge tanks to remove silt and sediment to enhance their water retaining levels.

The farmers also pointed out that some main tanks which provide water for cultivation have not been renovated for a long period and the President instructed officials to look into it.

The President after pointing out that the drought has also affected some parts of the hill country told officials that if the conditions prevail it could affect the electricity generation as well. He discussed water management methods with them to overcome such difficulties.

Officials also pointed out that in comparison to past seasons, this year farmers have taken steps to cultivate more paddy lands. This too was cited as a reason for lack of water for paddy cultivation in some areas.

Here attention was drawn towards encouraging farmers to engage in other cultivation as well, where the amount of water used is less.

Following the meeting the farmers conveyed their appreciation to President for taking swift measures to help them in their hour of need. They pointed out that the President had taken steps to assist them immediately after returning to the country following a visit abroad.