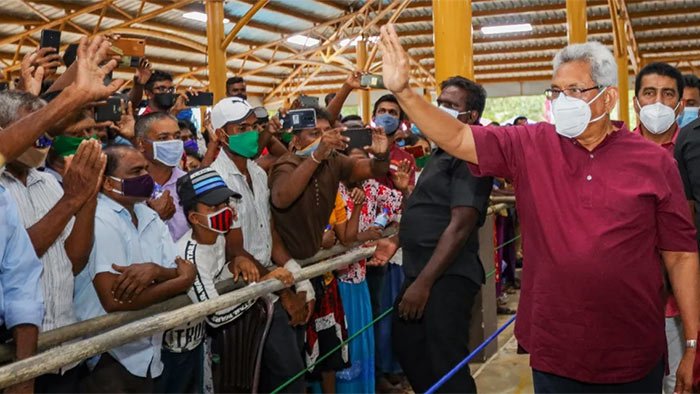 President Gotabaya Rajapaksa has directed the Minister-in-Charge to accelerate the construction works of the Central Expressway project.

Construction of the section from Colombo to Kurunegala has been disrupted due to issues relating to the compensation payment process. The President instructed Minister Johnston Fernando to complete the construction of the expressway while providing a quick solution to the prevailing problems.

President Rajapaksa gave these directives during a public gathering held in Mawathagama Public Fair premises, Kurunegala, during his tour of the district for the 2nd day today (27) in support of the candidates representing Sri Lanka Podujana Peramuna (SLPP).

Prime Minister Mahinda Rajapaksa, who accompanied the President to a public meeting organized by candidate Kamal Perera, stated that strong and stable parliament is needed to implement the promises in “Vistas of Prosperity and Splendour” policy statement.

President Rajapaksa, in response to a request by the All Island Inter District School Children Transportation Association, agreed to grant another six-month moratorium on the leasing rentals of all school vans.

The President also instructed the Army Commander to fulfil the request made by the students of Nidahasgama Vidyadeepa and Devapola Kumara Schools to renovate their school playgrounds.

Minister Johnston Fernando told the President that he will take necessary measures to build an Indoor Badminton Court in Mawathagama National School. It was also decided to construct a “Seva Piyasa” building for the field officers in Kahapathwala.

The President who arrived at the Dodangaslanda Public Library Ground, responding to the requests made by a group of students and the Principal said that the Sir John Kotelawala Central College will be upgraded to a national school.

President engaged in cordial discussions with the people who gathered on both sides of the road leading to Dodangaslanda Rideegama Sathi Pola grounds. A group of employees who had gathered in front of the Dodangaslanda Hospital told the President that patients had to travel to Kurunegala due to shortcomings that existed in the hospital. The President instructed the relevant officials to look into the matter and find a speedy solution to it.

Both President and the Prime Minister participated in the public rally at Dodangaslanda Weekly fair premises organized by the SLPP candidate R.D. Wimaladasa. President Rajapaksa was informed of several issues faced by the residents of the area including, the price drop in minor export crops, drug menace and the need to improve the condition of the road network in the area.

The President and the Prime Minister also attended the public meeting in Pradheshiya Saba Ground, Alawwa organized by the candidate Sumith Rajapaksa. Several artistes as well as the SLPP Chairman Prof. G.L. Peiris were present at the location.

The construction of a flyover above Alawwa railway crossing and several other town development plans were brought to President’s attention. Locals informed the President  about the construction of a private building on a land which falls under the purview of Dambadeniya Hospital administration and lack of facilities in the hospital.

The President and Prime Minister attended the public rally at the Dambadeniya Development Foundation premises organized by the SLPP candidate Shantha Bandara.

The President and Prime Minister were apprised of the hardships the small scale industrialists had to face as the export of their products fell apart. President Rajapaksa requested the locals to inform the Presidential Secretariat via anonymous calls in order to apprehend the local drug dealers in response to a request made by the public at the venue.

Attending a gathering organized at Cooperative Ground in Kuliyapitiya President pledged to formulate a national programme to rehabilitate all tanks in the country.

Tanks and irrigation system remaining for a long period of time without proper rehabilitation is a major issue raised by the people in all the districts visited by the President recently. It had posed a severe deleterious impact on agriculture and the day to day life of the people. As a solution to this issue, all tanks in the country will be rehabilitated with an effective and standardized plan, the President said.

The meeting was organized by candidate Samanpriya Herath.

President exchanged pleasantries with the people at the gathering organized by candidate Somasiri Gunathilleke at Neralugama Ground in Dummalasuriya, Bingiriya. President Rajapaksa was briefed by self-employed persons engaged in pottery industry of the problems they face. The President immediately ordered the Police to allow them to pursue their livelihood freely.

President also attended the public gathering organized by candidate Anura Priyadarshana Yapa at Public Ground in Pannala, Katugampola. The President said that the request made by students to construct a new administrative building and a swimming pool for the 150-year old Pannala National School will be fulfilled.

President was also apprised of the issues face by the people engaged in brass and other traditional crafts when applying for loan facilities.

Responding to the request made to eradicate the drug menace President told the public to anonymously forward information on drug related activities in their respective areas to the Presidential Secretariat.