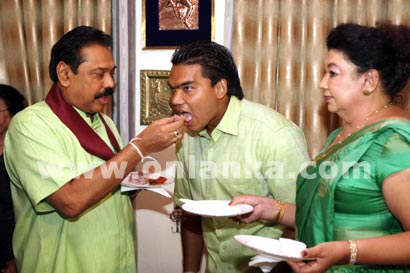 President Mahinda Rajapaksa and his family celebrated the Sinhala and Tamil New year rituals at Carlton Residence in Tangalle, Hambantota. First Lady Shiranthi Rajapaksa conducted all rituals at the auspicious time with the President Rajapaksa. President Rajapaksa’s elder son Namal Rajapaksa, newly elected MP for Hambantota district and the Defence secretary and his brother Mr.Gotabaya Rajapaksa also participated the celebrations. They all are seen here in the pictures with locals and President’s close supporters enjoying Sinhala Avurudu traditional foods at Carlton House.

Meanwhile in his message for the Sinhala and Tamil New Year issued by the President Media Unit, President Mahinda Rajapaksa stated “It is my belief that these New Year festivities should seek to further unite our people in heart and mind”. He further said “The New Year celebrations by Sinhalese and Tamils alike are most appropriate in recognizing the kinship among us. This is the continuance of strong cultural traditions that strengthen the bonds among the people of our land. I trust that this Sinhala and Tamil New Year which reflects the unity and pride of our nation will be celebrated by all in the spirit of joy, peace, sharing and contentment which will lead us to a future of prosperity, the President emphasized. 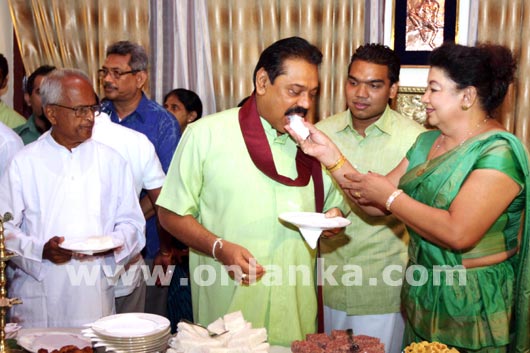