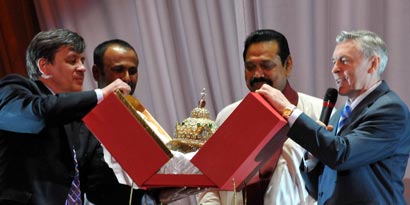 President Mahinda Rajapaksa and Madam Shiranthi Rajapaksa participated at the Golden Jubilee Anniversary celebrations and a cultural show of the Peoples’ Friendship University, which was held at the university auditorium in Moscow yesterday evening, 7th February.

President Rajapaksa is seen here being welcomed at the ceremony by the students of the university and the Vice Chancellor Professor Vladimir M. Philipov.

The Sri Lankan President was honoured once again at the cultural show by Prof. Philipov, by presenting a memento, a Russian style gold plated crown, decorated in precious stones. Later the President addressed the gathering and recalled the friendly ties between Sri Lanka and Russia.

President Rajapaksa, who is presently on a tour of Russia, received the Honoris Causa Doctorate from the Peoples’ Friendship University formerly known as Patrice Lumumba University in Moscow on 6th February. He was conferred the Doctorate for his contribution to world peace in defeating terrorism and for his distinguished service to education and development. Among the distinguish guests there were many Sri Lankan students at the function.

On his first state visit after being elected to a second term, President Rajapaksa is due to meet with his Russian counterpart Dmitry Medvedev and Prime Minister Vladimir Putin this afternoon.

3 Responses to President Rajapaksa receives a crown in Moscow