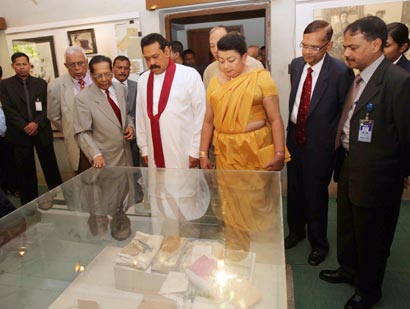 President Mahinda Rajapaksa who is on a three day official tour in Bangladesh visited the Bangabandhu Memorial Museum in Dhaka on Tuesday morning 19 April. The President paid a floral tribute to the Bangladesh founding leader, the late Bangabandhu Sheik Mujibur Rahuman’s statue erected in the museum, the house where the Father of the Bangladesh Nation lived most of his life until he was assassinated in a predawn military coup in 1975.

When President Rajapaksa reached the historic House, Number 32 at Dhanmondi, Dhaka in the morning he went straight to the portrait of Bangabandhu, stood in solemn silence and placed wreaths on the image as he looked twice with deep respect to the picture of Bangladesh’s founding father.

Minister in Waiting Dipankar Talukder, who is the state minister for CHT affairs, took President Rajapaksa and his wife to the ground floor of the two-storey ordinary house and showed them the rare pictures of Bangabandhu, his young leadership, hard struggle for independence and meeting with statesmen from all over the world, including Russian President Leonid Brezhnev, Iraqi President Saddam Hussein, Libyan President Mummer Gaddafi and Indian Prime Minister Indira Gandhi.

Seeing all the pictures on the ground floor, Rajapaksa walked to the 1st floor and saw the simple living style of a statesman, who not only placed Bangladesh as an independent state in the world map, but also earned high laurel from all over the world. The President also signed the visitors’ book. 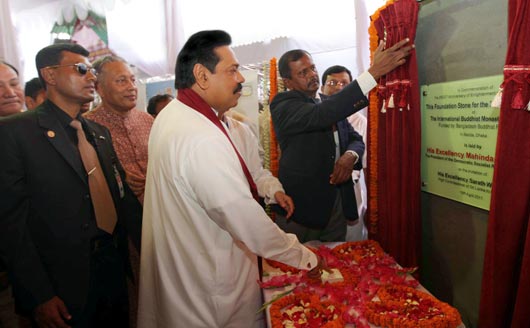 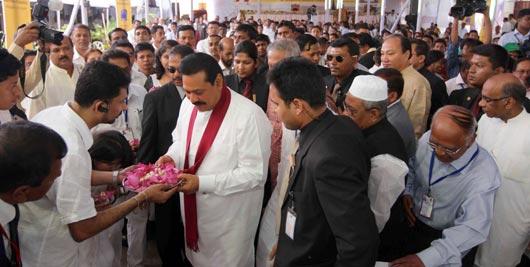