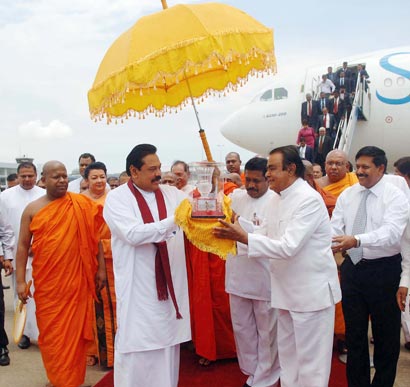 President Mahinda Rajapaksa returned to Sri Lanka today (Wednesday) on 20 April after a three day State visit to Bangladesh. President returned with sacred hair relics (Kesha Dhathu) of the Lord Buddha given by Bangladesh. The sacred relics will be deposited at the Hunupitiya Gangaramaya Temple in Colombo from 6.00 pm today.

Responding to a request made by the Sri Lankan President, Bangladesh Prime Minister Sheikh Hasina agreed to release the Lord Buddha’s hair relics deposited at Chittagong to be taken to Sri Lanka for a public exposition to mark the 2600th Sri Sambuddhathva Jayanthi commemoration.

President Rajapaksa handed over the sacred relics to Prime Minister D.M.Jayawardena at the Airport. A special religious programme was conducted by Maha sangha headed by the Chief Incumbent of the Gangaramaya Temple Venerable Galaboda Gnanissara Nayaka thero at the Airport.

Pictures are seen here President Mahinda Rajapaksa is arriving with sacred hair relic of Lord Buddha at Katunayake Ariport after a successful state visit to Bangladesh, Prime Minister bearing the relics alongside the President on arrival and venerable Maha sangha conduct rituals.

First lady Shiranthi Rajapaksa, Cabinet Ministers, MPs, Secretary to the President Lalith Weeratunga and a large number of officials were present at the Airport. 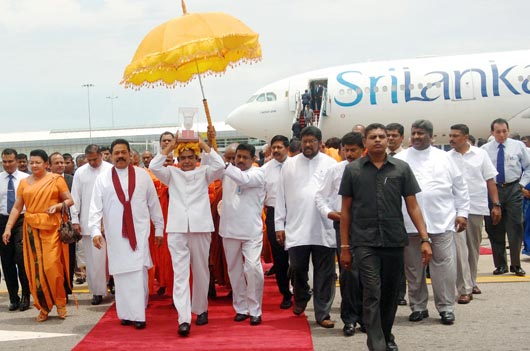 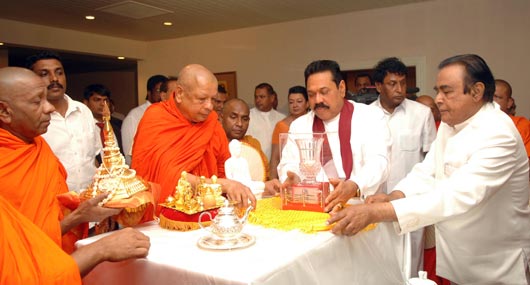