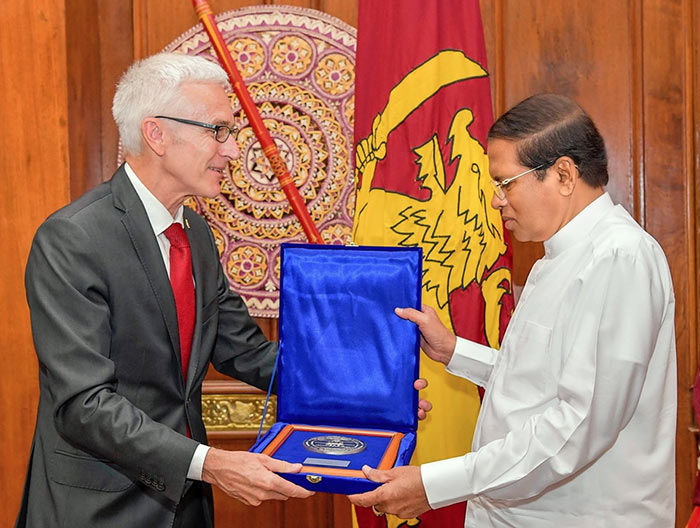 Stock praised the swift action taken by the President, Ministry of Defence, Sri Lanka Police and Intelligence services to apprehend suspects who were responsible for the Easter Sunday terrorist attacks.

The President thanked INTERPOL Secretary General for immediately responding to the request made for assistance to investigate the April 21 explosions by terrorists. Mr Stock said that his organization could send a team of experts to Colombo within two days of the attack and provide intelligence expert guidance and database information on terrorists. The INTERPOL maintains a database and intelligence services could access these data through INTERPOL Asia office in Singapore.

Mr.Stock said that Sri Lanka police and intelligence officials are highly professional and the INTERPOL experts received their fullest cooperation.

President Sirisena thanked the INTERPOL for the assistance given to Sri Lanka for fighting criminals. He wanted further cooperation to detect drug smugglers and to extradite drug lords and the financial criminals hiding in foreign countries.

INTERPOL Secretary General assured the President fullest cooperation. He said new agreement could be reached to provide new drug-tracking police tool and expertise to law enforcement officials to identify the origin and routes of compressed drug deliveries and shipments through an automated comparative analysis of the tool-marks, logos and chemical compositions of drug packages.