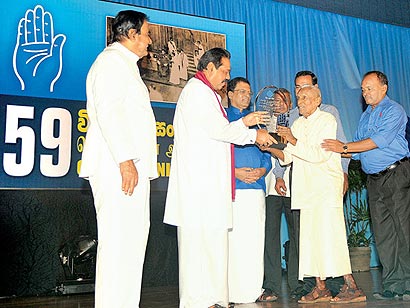 President Mahinda Rajapaksa told the 59th anniversary meeting of the SLFP yesterday that accelerated development, a stable Government, strengthening democracy, peace and prosperity in line with people’s expectations were the aims of the envisaged constitutional amendments and not the extension of his term in office.

Addressing over 15,000, including party cadres from top to the grass-roots level at Temple Trees, the President said that if he chose to go for a third term first the party had to sanction his candidacy and next the people had to decide whether or not to retain him.

Emphasizing that there were mis-information in this regard the President said that deleting the clause which restricts the number of contesting opportunities would pave way for greater sovereignty and widen peoples scope of choice.

Addressing cheering party cadres President Rajapaksa noted that the SLFP with the help of other stakeholders had created the strongest Government in Asia today.

The two thirds majority which pundits claimed as a near impossibility under the present constitution is within the reach of the Government, he added.

The Government is of the view that certain clauses in the Constitution should be amended to pave way for accelerated development and greater stability and efficiency to fulfill people’s expectations and we are committed to do so, he observed. Commenting on the envisaged changes to the 17th Amendment, the President noted that what had been done was to re-enlist certain regulatory powers which the parliament lost in 1978.

According to the President the proposed council which replaces the CC would consist a member each from the Tamil and Muslim communities in addition to the Premier, Speaker and the Opposition leader .

He urged the party cadre to go to the grass-roots level and educate the masses on these new changes.

He stressed that since the victory over terrorism the emphasis today was on development and also urged party members to take the reigns of development in their respective villages.

He said that as SLFP’s in power all had a responsibility to ensure a prosperous and peaceful nation for the present as well as future generation.

On the occasion three resolutions on Economic prosperity, Development, Conquering the future through harmony and need for Constitutional amendments in national interest presented by Minister Nimal Siripala De Silva, Minister Ratnasiri Wickramanayaka and Prime Minister D.M.Jayaratne respectively were adopted by the membership unanimously.

An electronic automated SLFP membership card too was introduced with the inaugural card being given to Prime Minister D.M.Jayaratne by the President. The President later handed over similar membership cards to other senior leaders.

Immediately after, the SLFP membership felicitated one of their senior most citizens, the veteran T.D.Pasquel of Matugama with the President presenting him a memento.

The cheerful atmosphere both within and outside the auditorium at the Temple Trees was further enhanced with the colourful cultural events presented by the ‘Youth’ dancing troupe of the National Youth Council.