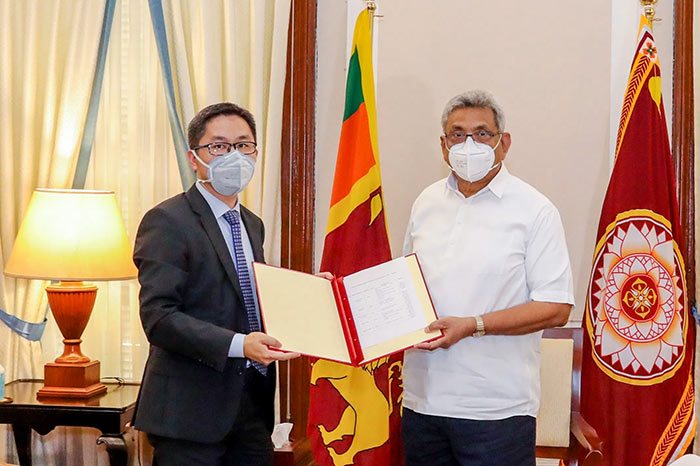 The Chinese delegation also conveyed President Xi’s deep appreciation of Sri Lanka’s successful efforts to fight the COVID-19 pandemic. The Chinese government has sent a consignment of medical supplies to help Sri Lanka’s continuous fight with the virus. These supplies are already with the Health Ministry. Acting Ambassador handed over the lists of the supplies to President Rajapaksa.

President Gotabaya thanked President Xi and the people and companies of China for their unstinted support during the past difficult weeks as Sri Lanka battled with the pandemic. The Chinese delegation noted that both Sri Lanka and China followed similar tracking system to identify potentially COVID-19 patients. Both countries were able to successfully tackle the crisis because of the dedicated efforts of their respective Security Forces and Intelligent Officials.

The two countries have shown immense cooperation in supporting each other during the global pandemic. Early February this year, when China was fighting its worst battles, Sri Lanka gifted a consignment of the finest black teas as it is considered to have healing properties. Furthermore, pirith was chanted throughout the Island invoking blessings to those infected with the virus in China. Students from Devi Balika sent drawings of solidarity that really captured the appreciation of First Lady Peng Liyuan.

Appraising the latest situation in Beijing, the delegation noted that though close to 100 had got infected, the situation is under control. Fortunately, the Chinese officials had been able to quickly track the source of origin. Surprisingly, it was not due to a person-to-person transfer, but through a consignment of salmon from Europe. WHO too has attached great importance to this development, noted the delegation.

A range of other topics were also discussed by the two parties. The main focus was on the tea auction and how best to promote Sri Lankan tea, renowned as the world’s best, in China. The talks included the Chinese investments in Sri Lanka and improving financial cooperation between the two countries.