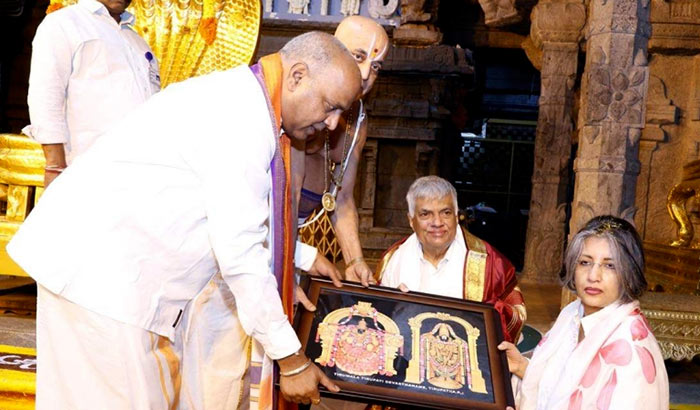 The 69-year-old Wickremesinghe, dressed in traditional attire and accompanied by wife Maithree and a few Sri Lankan officials, visited the shrine this morning, a temple official told PTI.

On arrival, he was accorded a traditional welcome by priests and top officials of the temple, administered by the Tirumala Tirupati Devasthanams.

Wickremesinghe who is in India on a 20-hour spiritual visit, flew in from Chennai by an IAF helicopter last evening.

This is his third visit as Sri Lanka’s prime minister to the hill shrine after previously visitng in 2002 and 2016.

Tight security arrangements were put in place in view of the visit to Tirumala hills.

Speaking to reporters after worshiping at the temple, the PM said that he spoke to DMK working president M K Stalin over phone and enquired about his father M Karunanidhi’s health.

Karunanidhi, admitted to a private hospital after his blood pressure dropped on July 28, has been advised an extended hospital stay.

“This evening in India I spoke with M.K. Stalin, the son of DMK Leader, M. Karunanidhi who is currently unwell in hospital,” Wickremesinghe also said in a tweet.