“Private sector has a major role to play” 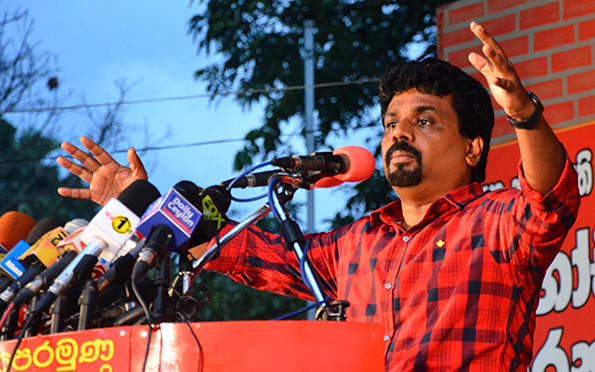 Janatha Vimukthi Peramuna (JVP) Leader Anura Kumara Dissanayake says that the party will build a regime which will be a force in the government which the people will elect on August 17. The leftist party, which has been in active politics during the past five decades, invites people to decide whether they need a mere regime change or a real change that can design a development program for the country.  Dissanayake also stressed that they will not bring unrealistic pledges at the elections like other parties. “One has already promised to create 1,000, 000 employment opportunities. Instead of making impracticable promises, we must first break the gap between the people who ‘Have’ and ‘Have not.’ “A program should be introduced to meet this gap,” the JVP Leader said.

“We won’t be distributing applications for jobs during the campaign period, but we will be there to make sure that only the qualified and talented get the jobs. We won’t assure your son or daughter a popular school. But we can guarantee that all the children must have a school,” he stressed.  In this interview, he also rejected Minister Wijeyadasa Rajapakshe’s allegation that the JVP took money from him. He also criticized the way in which prices of LP Gas was brought down by the government. “Ravi Karunanayake announced it at the party convention and the gazette notification came later. The UNP has already mingled national politics with party politics,” he added.

Q – An election is nearing. The JVP was supporting the common Opposition candidate at the last presidential election. What is JVP’s plan for the general elections scheduled for August 17?

First of all, we have to understand that the country achieved a victory on January 08. People defeated President Mahinda Rajapaksa’s wrong policies on economy, foreign affairs, administration, democracy and the frauds, bribery and corruption. Now that is over. But, just by defeating such wrong policies the country will not get anything. Instead, we have to bring alternative policies to develop the country. The  JVP is in that process. I must say that all other camps are doing an extension of same Rajapaksa theory. The difference is absence of the Rajapaksa name and Satakaya, but the presence of a coat and tie.

Q – What type of program are you suggesting?

There is no single person in our nomination lists with black marks. They are good humans with a genuine need of serving the country. Then, have a look at our national list. They are people, experts in different subjects, who don’t want to engage in election ploys.
Now you have a look at the United National Party’s list. For example, Minister Champika doesn’t like Minister Hakeem, Minister Rajitha blasted Ranil even in the recent past. That is a dirty team (Ashuddha sandhanayak).  It is the same in the United People’s Freedom Alliance. They don’t believe in each other.

But, the JVP team appears for a common purpose. They they all represent same ideology of developing the country. We have a realistic program and it will be out soon.

Q – But, still the people view the party suspiciously. Why is that?

Well. I admit that. There are several reasons. The first one is the JVP having a history with firearms. That is over now and we will give you a guarantee that the JVP will never return to that again. Our politics is mainly based on people and we respect democracy.
The second one is that the private sector has been given a wrong picture that they have no future under a JVP regime. We must tell you the private sector has a major role to play in the journey of developing the country. A profound vision, a right target and a disciplined environment, required resources, a handsome salary among other things are the basic needs for them. Lack of these basics has driven them to do unaccepted things. They should be given the courage to reach the international market.

Some are worrying about our foreign policy. The JVP is not a stagnating party and it grabs the latest technology and observes the development of the world. We know that the socialist movement in Russia was defeated in 1997. We have to realize that Asia is offering a challenge to other economies. China, India and Japan play major roles in that scenario. Our foreign policy is up-to date and efficient to do transactions with the world.

Well. We do investments and loans. We do investments to raise the capital and to obtain the latest technology. Any investment plan should be a part of the country’s economy and it should never be decided on the commission that an investor receives nor on any politician involved in it. I am clueless as to how the public’s money should be used unnecessarily on useless projects.

Q – What would be the lifestyle of the general public under a JVP regime? Will people have to tighten their belts?

Who says so? Entertainment is a must for all. We don’t ask the society to go for a lifestyle of austerity or over consumption.

I like that question because some have the wrong notion about the 100-day program. The Government which was formed just after Maithripala Sirisena’s victory was not authorized to Engage in mega development projects. It is wrong to ask why this coalition government hasn’t initiated mega development programs.

It has been entrusted implement reforms like the 19th Amendment, Abolish the Executive Presidency, preserve democracy and give due freedom to citizens.

However, the JVP does criticize the 100-Day Program. The 19th Amendment to the Constitution was made, but not up to the expected level. A code of ethics for people’s representatives, Right to Information Act, Audit Act and several others which had been promised were not implemented. Hence, other than the cancellation of the 18th Amendment, noting serious was done.

SLFP leader is the President and the UNP leader is the Prime Minister. There are 35 Cabinet and deputy ministers from the UNP and 36 from the SLFP, but nothing serious which benefits the country has taken place. Being in the National Executive Council, the JVP took an effort to convince these to the government and when it failed we withdrew from it.

Q – But, how do you win votes of people who have been already attracted by other main parties?

People are intelligent now. Just because parents are UNPers, their children don’t join the same camp. They need the right guidance and confidence to make a decision on their own.

There was a period which people voted for a roofing sheet, an employment opportunity, a school for their children etc. Politicians don’t want people to escape poverty. We will show them the way.

Q – How do you view the President’s speech made last Tuesday evening?

He wants to be in power for the next five years and has to keep the promises made by him. But, he does not have a strong team. However, the most important part is his (President Sirisena’s) revelation over the former President. He mentioned about President Rajapaksa’s way of appointing PMs as the president and the efforts to be the President for the third time and remain for a lifetime. On the other hand, it shows that SLFP is in a dangerous situation.

Q – After all, former President Rajapaksa is contesting the elections. How do you see this?

He will secure a seat from Kurunegala. But, I don’t think that he will be capable of securing his Parliament seat after the election. There are financial charges against him and his henchmen. All those cases will be heard. The JVP will fully engage in the process of taking up those cases and punishing the wrong doers.

Q – Financial Crimes Investigation Division is new and it has received a lot of criticisms against it? Why was that and are you satisfied with the way it was handled?

When we have a terror issue we made TID. When we got a drugs issue we set up the Department of Narcotics. When we have bribery and financial irregularities we set up FCID. What is wrong in it? Further, I must tell you the Bribery Commission is dysfunctional today. CID gets all the complaints from here and there and they can’t look for these issues with limited resources they have. That’s why the FCID was set up. Though none has been punished yet, the process will be continued.

1 Response to “Private sector has a major role to play”

Home » “Private sector has a major role to play”