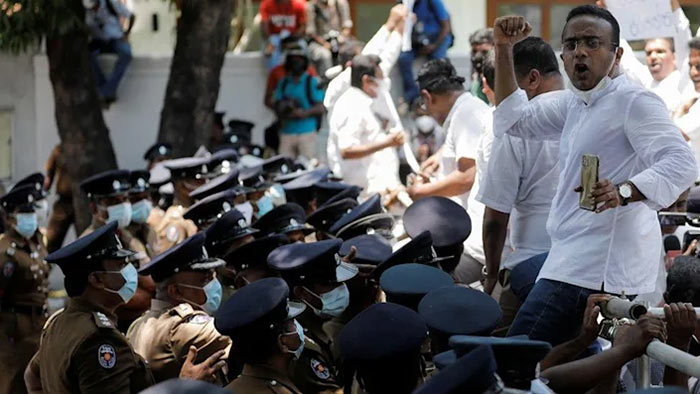 People protesting in Sri Lanka against the government’s handling of the worst economic crisis in decades have defied a curfew in several cities.

In the capital Colombo, opposition protesters faced off with security forces for a couple of hours before dispersing peacefully.

But in the city of Kandy, police fired tear gas and water cannon at students.

The 36-hour curfew was imposed by President Gotabaya Rajapaksa after clashes near his residence on Friday.

People are banned from being on any public road, in a park, on trains or on the seashore unless they have written permission from the authorities, and access to social media was blocked temporarily.

The island nation is grappling with what is said to be its worst economic crisis since independence from Britain in 1948. It is caused in part by a lack of foreign currency, which is used to pay for fuel imports. With power cuts lasting half a day or more, and shortages of food, medicines and fuel, public anger has reached a new high.

It is a massive turnaround in popularity for Mr Rajapaksa, who swept into power with a majority win in 2019, promising stability and a “strong hand” to rule the country.

On Sunday, soldiers armed with assault rifles blocked an attempt by a crowd of hundreds of protesters to march to Independence Square in the capital.

“President Rajapaksa better realise that the tide has already turned on his autocratic rule,” opposition MP Harsha de Silva told AFP news agency at a rally. Another opposition MP, Eran Wickramaratne, said: “We can’t allow a military takeover. They should know we are still a democracy.”

In Kandy, a city of 125,000 people in Central Province, police fired tear gas at hundreds of protesting students near the University of Peradeniya.

The social media crackdown has been criticised by the president’s own nephew, Namal Rajapaksa, who tweeted: “I will never condone the blocking of social media. The availability of VPN, just like I’m using now, makes such bans completely useless.”

I will never condone the blocking of social media. The availability of VPN, just like I’m using now, makes such bans completely useless. I urge the authorities to think more progressively and reconsider this decision. #SocialMediaBanLK #SriLanka #lka

Protesters retaliated by pelting police with stones and at least two dozen police personnel were reportedly injured, with a number of vehicles also set on fire.

Food and fuel have been in short supply for weeks. Now people fear they’re losing their basic liberties after the government blocked access to social media sites, including YouTube, Instagram and Facebook, WhatsApp and TikTok. Many believe it’s to prevent people organising protests and to shut down criticism.

Police and the military are on the streets of Colombo. Mass demonstrations had been planned today but with a curfew and state of emergency in place most people have stayed home. The streets of the capital are mostly deserted, but we encountered a few protests throughout the day, which passed peacefully with the police at a close distance.

Overnight, the authorities in the west of the country say they arrested more than 600 people for violating the curfew. The government says it’s brought in the curfew to maintain order after protests turned violent last week but many people we’ve spoken to – from all walks of life – blame the authorities for mismanaging this crisis.

Frustration is growing. “Enough is enough,” Roshinta, a student, told me as she held a placard in the city centre before the curfew kicked in. “Millions of people are suffering, and we are angry.”