Queen to accord audience to President 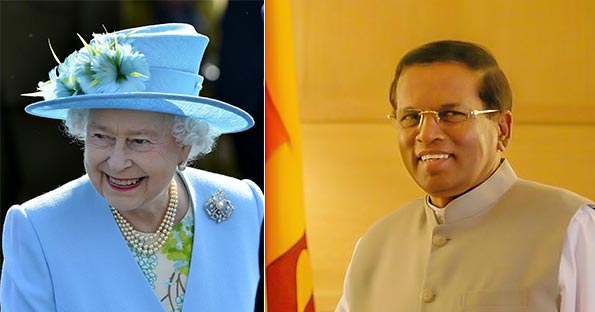 President Maithripala Sirisena is to undertake an official visit to Britain on March 7. He will attend the Commonwealth Week celebrations at Westminster Abbey in London on March 9, as the Chair of the Commonwealth.

Queen Elizabeth 11 has agreed to accord a private audience to President Sirisena, sources said. This is the first time in over two decades that a Sri Lankan Head of State will receive an audience with the Queen. President Sirisena is also expected to meet British Prime Minister David Cameron. When inquired, Cabinet Spokesman and Health Minister Dr. Rajitha Senaratne yesterday confirmed that President Sirisena will visit London on the invitation of the Queen

This would be President Sirisena’s first visit to United Kingdom since assuming office on January 9 and his second overseas visit following the one to India recently.

Commonwealth Day is celebrated across the Commonwealth by young people, schools, communities and civil society organisations on the second Monday in March every year. “It provides an opportunity to promote understanding on global issues, international co-operation and the work of Commonwealth organisations’ according to Commonwealth Secretariat’.

The day is marked by a range of activities, including a multi-faith Observance at Westminster Abbey in London. Each year a theme is chosen for Commonwealth Day and the theme for 2015 is ‘A Young Commonwealth’.

Commonwealth Secretariat quoting Secretary-General Kamalesh Sharma, in a media release on this years theme said, “A Young Commonwealth recognises the capacity, contribution and potential of young people, who play a vital role at the heart of sustainable development and democracy,”.

“The Commonwealth is also a family of dynamic countries at the forefront of innovation, growth and contributing global value. As a diverse and increasingly connected global network, we bring fresh perspectives and new ideas.” Sharma said in the statement.

Home » Queen to accord audience to President