‘Bring in a no-faith motion against Ranil’ – JHU challenges Opposition 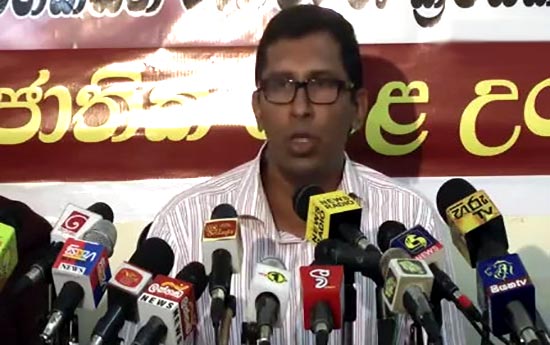 The Jathika Hela Urumaya (JHU) yesterday said if anyone has a problem about the appointment of Ranil Wickremesinghe to the office of Prime Minister, they can bring a no-confidence motion against him.

National Organizer of the JHU, Nishantha Sri Warnasinghe, addressing the media said Prime Minister Wickremesinghe was appointed to the post by President Maithripala Sirisena in accordance with the agreement he had with the UNP and if that appointment has created any issues, the opposition can bring a no-confidence motion against Wickremesinghe.

“According to the Constitution, the President has a right to appoint the Prime Minister. However, people’s opinion is that after Maithripala Sirisena emerged victorious, a United National Party (UNP) Government was appointed. The UNP, as well as the SLFP, are at fault if Wickremesinghe’s appointment has created issues,” Warnasinghe added.

He also said, it seems the SLFP is willing to be a part of a national government and that may be the reason why they do not bring in a no-confidence motion against Wickremesinghe.