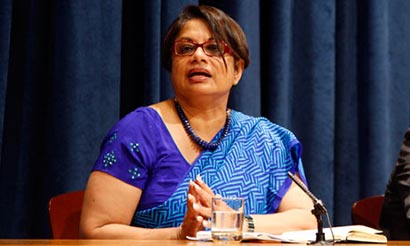 Former Under Secretary General of the United Nations/Special Representative for Children and Armed Conflict Radhika Coomaraswamy was chosen for the Special Jury Prize 2012 by the Fondation Chirac (Chirac Foundation), states a press release from the Sri Lankan Embassy in Paris.

The Fondation Chirac was created in 2008 by former President of France, Jacques Chirac, at the term of his presidential mandate.

The foundation will also award Father Francisco De Roux the Prize for Conflict Prevention for his action in favor of development and democracy in the Magdalena Medio area, in Colombia. The announcement of the two laureates, who were chosen for their exemplary nature and the urgency of their efforts, was made today, October 11th, 2012, during a press conference organized by the Fondation Chirac, in partnership with the French Senate and the AFP Foundation (French Press Agency). The awards ceremony will take place

on November 22. Both prizes will be awarded by former President of Senegal Abdou Diouf.

Radhika Coomaraswamy was chosen for her actions aimed at the protection of children in armed conflict. During her mandate as Special Representative she put in place 17 action plans for the eradication of the use of child soldiers around the world.

She also contributed to the recognition, at the International Criminal Court, of individual criminal responsibility of those recruiting or using child soldiers.

The Award for Conflict Prevention aims to improve awareness and support for those who dedicate a part of their lives and resources to prevent conflicts. Previous recipients of the Special Jury Prize were: Louise Arbour (2011), former Chief Prosecutor of the International Criminal Tribunals for the former Yugoslavia and Rwanda, Lakhdar Brahimi (2010), former representative of the Front de Liberation Nationale (FLN) in Southeast Asia and Dr. Park Jae-Kyu (2009), former Minister of Unification of the Republic of Korea.