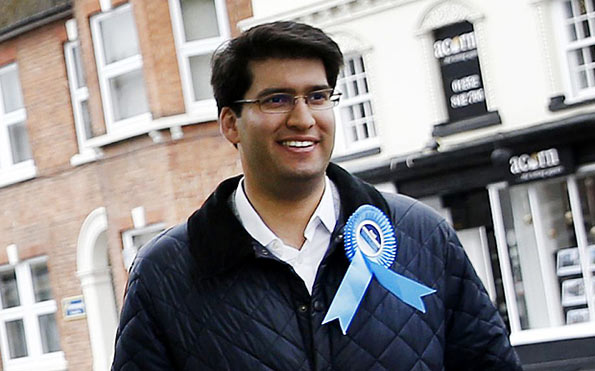 Ranil Jayawardena of Sri Lankan origin romped to victory in North East Hampshire constituency, taking a near-30,000 vote majority over the Liberal Democrats, the Get Hampshire said.

Conservative candidate Mr. Jayawardena will take the reins from James Arbuthnot, who bowed out after nearly 30 years as MP for North East Hampshire.

During Thursday’s vote (May 7), Mr Jayawardena took 35,573 votes in total, a staggering 29,916 votes ahead of Liberal Democrat candidate Graham Cockarill.

“I’m delighted more than 65% of voters have put their trust in me today,” he added. “The people of North East Hampshire have given me the chance to serve.

“They have put their trust in me – and I shall repay that trust.”

Speaking to Get Hampshire moments after stepping off the podium, a clearly very emotional Mr Jayawardena said: “I am very pleased thath the people of North East Hampshire have put their trust in me – it is my home.

“I grew up in Odiham, went to school there and now I live in Bramley. I’ve served my community as a local councillor and I am very pleased I will be able to represent them in parliament.”

However, the night was not without controversy, with Mr Jayawardena refusing a handshake from UKIP candidate Mr Blay.

It comes after Mr Blay was suspended by UKIP earlier this week after he was caught on camera by an undercover reporter from The Mirror threatening to “put a bullet” in Mr Jayawardena’s head.

Mr Blay spoke to Get Hampshire during the count on Friday morning (May 8) and stressed he was still hoping to get back into the party’s good books.

When asked if he regretted making the comments about Mr. Jayawardena, Mr Blay said he had no further comment to make.

Mr Cockarill, who was second to Mr Jayawardena, said he was pleased his party maintained a presence in the constituency, against a backdrop of huge Liberal Democrat losses nationwide.

Labour’s Amran Hussain said: “I think I ran a very positive campaign, and I’m happy with the results I got.

“I wish Ranil the best of luck and I hope he takes his work to the doorsteps of the constituency. That is my wish and request from him.”

Meanwhile, ‘Mad’ Max Bobetsky for the Monster Raving Loonies said: “It’s been good considering we’ve never stood in this constituency before. I’m very happy that Ranil won and I’m sure he will do a great service.”