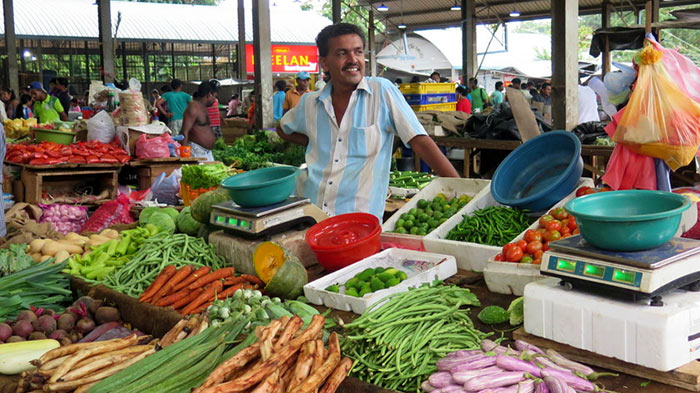 A sharp vegetable price hike, together with the domestic cooking gas shortage and safety issue, has given rise to a marked change in consumer behaviour, traders say.

In most markets, the scenes were the same – people buy small quantities and go for low-priced vegetables or green leaves. Those who cooked three vegetables for a meal are now forced to cook only one vegetable for a meal along with another dish of soya meat, dhal or kadala.

Whether they were markets in vegetable cultivating areas or urban areas, the sentiments expressed by the people were similar—frustration at not being able to afford a minimum intake of veggies in their daily meal.

A vendor from Modara, Colombo, Siriapala Andrahennadi, 62 said he had been in the vegetable sales business for the past 20 years but had never sold vegetables at such high prices.

“I am scared to bring vegetables for sale because if they do not sell at the end of the day if any vegetables remain I will suffer a loss. In the past, we know that a certain amount remains at the end, but I cannot now afford that loss”, he said.

“The consumption patterns have clearly dropped. All the green leaves like Mukunuwenna and Kathurumuranga leaves are the fastest-selling items these days,” he said.

In Pettah many consumers were seen picking up small quantities between 100 to 200 grams.

“In the past, I have never reduced the food in the house, but now I am compelled to do that because I cannot manage to buy provisions for my house as all the things are very expensive,” Anura Fernando from Kadawatha said.

Vegetable traders in the urban areas were also affected by the lack of gas supplies and persons opting to purchase food from restaurants. Kalyani Priyanthi from Moratuwa, said that vegetables such as beans, carrots and capsicum were not affordable now, and they relied on polos, breadfruit, amberlla these days. “It is not easy to feed the children with alternatives all the time”.

The worst-hit are the daily wage earners, who depend on local grocery shops and vendors to purchase vegetables on credit for their daily survival. Many families in suburban and rural regions have shrunk their meals significantly or go to bed hungry.

The less affluent families in remote regions of the country are also struggling with the social stigma of poverty.  Many families have to pawn their jewels or borrow more money to meet the increased hyper-inflation of essential items.

The changing food consumptions patterns due to the limited purchasing power of the masses will have a lasting impact on the population’s health and might lead to malnutrition, food nutritionists warned.

The essential food groups are cereals, legumes, vegetables, green leafy vegetables, meat, fish, eggs fruits etc. All food groups saw an acute increase in their prices in recent weeks. Price of an egg- comparatively cheap protein intake is increased to
Rs 27 currently while one kilo of chicken increased to Rs 750-850.

Dr Jaanaki Gooneratne, Former Head of Food Technology Section at Industrial Technology Institute, Colombo told the Sunday Times that imbalance in nutritional diet due to the non-intake of all food groups- vegetables will have a long term impact on the country’s population in future.

“Currently people are limiting their intake of certain food groups due to the increased prices. Lack of diet diveristy and inadequate amount of food consumption will have an impact of nutritional imbalance and malnutrition among the population in future,” Dr Gooneratne warned while stressing that lack of diet diversity of food groups reduced the availability of essential minerals such as iron, calcium and magnesium etc.

Sharing preliminary observations on an ongoing field study of the country’s food consumption pattern in recent times, Dr Gooneratne noted that she has found that a significant number of families among the rural populations in Badulla, Moneragala and Anuradhapura are trapped in debt cycles which limits their purchasing power significantly.

In Colombo, many high-end restaurants had to temporarily shut down their operations due to LP gas shortage even though there has been increasing demand from city dwellers to place orders from fast-food chains rather than cook their own meals at home.

A resident in Wellawatta had called three restaurants to reserve orders, but only to be told that the restaurants had scaled down taking orders or either temporarily closed due to the LP gas shortage.

Asela Sampath, Head of All Island Canteen Owners’ Association (AICOA) said that nearly eighty per cent of canteens and restaurants have been closed by this week owing to LP gas shortage in addition to the increased vegetable prices.

This saw the increase in the prices of vegetable lunch packets as well- a sharp increase to Rs 180 from Rs 120 a few months ago.