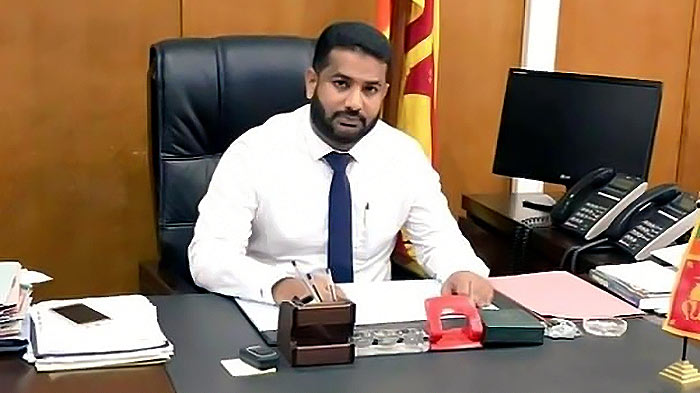 Riyaj Bathiudeen, brother of MP Rishad Bathiudeen, said Mohamed Ibrahim Inshaf Ahmed, the suicide bomber who attacked the Cinnamon Grand Hotel in Colombo on 21 April 2019, Easter Sunday, was married to the daughter of his relative and that he also attended the wedding.

He said he got to know Inshaf for the first time when he attended the wedding.  However, Riyaj said he did not have such a close and strong friendship with Inshaf, even after the wedding. He was testifying before the Presidential Commission of Inquiry into the 21 April 2019, Easter Sunday bombings, yesterday (14).

Bathiudeen testified that he learnt on television on the day of the bombings that Inshaf had also been among the bombers. “Although I was aware that he was involved in a spice export business, it was only after the bombings that I came to know that he owned a copper factory,” he added.

The witness said one day in February 2019, Inshaf called him and asked if he (Riyaj) could give him a chance to meet his brother, the then Minister of Industry and Commerce, Rishad Bathiudeen. The witness further said Inshaf had requested such an opportunity to discuss his export activities with Minister Bathiudeen. “I informed my brother about this, but he told me that such an opportunity could not be given in view of the busy schedule he had, the witness also said. Riyaj said he felt that his brother was reluctant to talk to Inshaf, but was not aware of the reason.

The witness also said that on 1 March 2019, Inshaf had called him and informed him that he would be coming to the Ministry that evening to meet the Minister. “We have been treated unfairly because of our export ban. We asked for time to talk about it. Since we are not given a time to discuss it, we will file a case. ‘Don’t be angry with us,’ Inshaf told me,” the witness said.

He said investigations by the CID found that he had received seven calls from Inshaf and that he had not made any calls to Inshaf. Riyaj also said he had never gone to Inshaf’s copper factory to meet him.