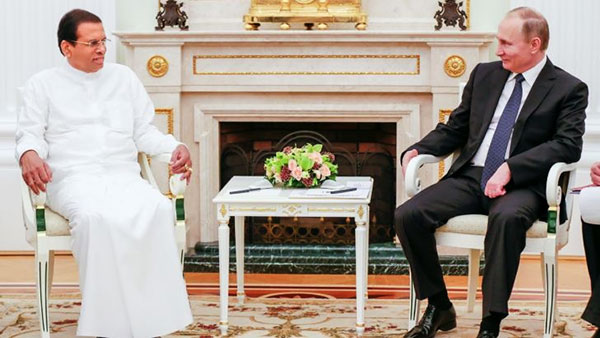 Sri Lanka and Russia pledged to enhance long term economic cooperation and affirmed to build a strong foundation to take bilateral relations to a new high.

These sentiments were expressed by Russian President Vladimir Putin and President Maithripala Sirisena during the historic meeting at the Green Room in Kremlin this afternoon,(23).

When President Maithripala Sirisena arrived at the Kremlin,he was warmly received by President Vladimir Putin.The two Presidents referring to the 60th anniversary of the establishment of diplomatic relations between Sri Lanka and Russia agreed to take effective steps to ensure strong bilateral relations between the two countries.

President recalling his last meeting with the Russian President in Goa last year thanked him for extending an invitation and ensuring support for economic development in Sri Lanka as well as for Russia’s enormous support in international forums. President Sirisena said that he is proud to mention the fact that the Founder of his party S.W.R.D. Bandaranaike established the diplomatic relations with Russia,then know as the Soviet Union in 1967.

The visit is expected to strengthen friendship and cooperation further and enhance bilateral trade between Russia and Sri Lanka.

Foreign Minister Mangala Samaraweera and Ambassador Weerasinghe were also attended in the discussions.