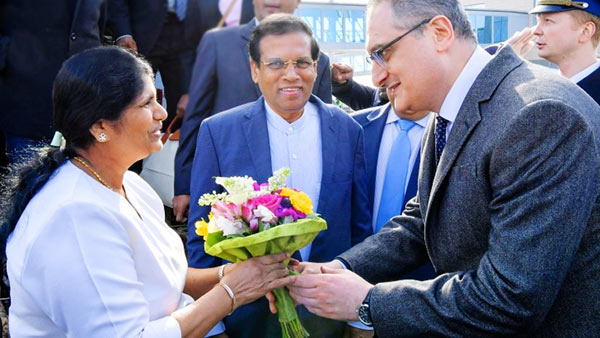 President Maithripala Sirisena received a warm welcome at the Domodedovo International Airport in Moscow yesterday (22nd March). He was received by Deputy Minister of Foreign Affairs Igor Morgulov, Chief of Protocol and other high officials of the Russian Federation.

The ceremonial welcome will be held at the Kremlin in Red Square today where President Vladimir Putin will welcome him and a guard of honour will also be held.

This is the first official tour of a Sri Lankan leader to Russia in four decades after the state visit of Prime Minister SirimavoBadaranaikein 1974. The President was accompanied by Mrs. Jayanthi Sirisena and several ministers and officials.

During the visit, President Sirisena is scheduled to meet President Putin, Prime Minister Dimitri Medvedev and other leaders in Kremlin in Red Square. Several agreements will also be signed between the two countries. The President will place a wreath at the Tomb of the Unknown Soldier in Moscow. He will also attend the ceremony to mark 60th Anniversary of establishment of diplomatic relations between the two countries.