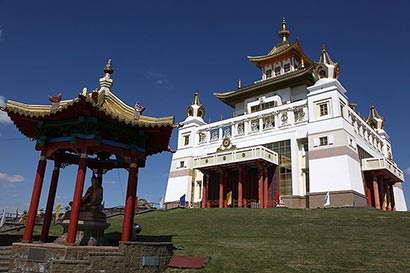 Kalmykia state is a Buddhist area in Russia where Vesak Has been declared a public holiday.This is Golden Temple in Elista city there

Russia has announced that they have published “The first encyclopaedia of Buddhist philosophy”  where Buddhism has seen a revival after the collapse of Communism.

“The encyclopaedia analyses the philosophical aspects of Buddhism in the context of different civilisations, cultures and religions, including Hinduism, Christianity and Islam”, a report said.

Releasing the book at a function held at the Institute of Philosophy of the Russian Academy of Sciences India’s Ambassador Ajai Malhotra said that the philosophy of Lord Buddha was a relevant today as ever and would continue to inspire future generations across the world.

Dr. Marietta Stepanyants, head of the chair of Eastern philosophies, who edited the encyclopaedia, thanked the Indian Embassy for continued support through the funding of the Mahatma Gandhi Chair at the Institute of Philosophy and the award of scholarships to the best Russian students of Indian philosophy.

Ambassador Malhotra recalled that the Embassy of India had also cooperated in the publication in Russian in 2009 of the “Encyclopedia of Indian Philosophy” and suggested as a next step that the Institute of Philosophy may like to bring out an Encyclopedia of Jain Philosophy in the Russian language. He offered the Embassy’s help for this project.

Buddhism has been on the upsurge in Russia in recent years, along with Christianity and Islam. Dozens of temples have come up in predominantly Buddhist regions of Buryatia, Kalmykia and Tuva. Buddha’s birthday has been made a national holiday in Kalmykia this year and a 15-metre statue of Buddha, the biggest in Russia, is being set up in Tuva.