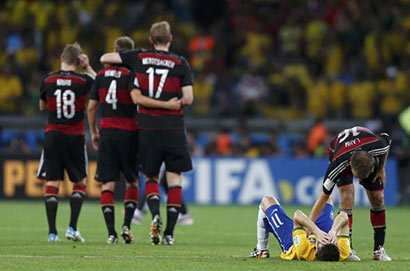 The nation whose attacking soccer has thrilled the world for generations was left heart-broken on Tuesday after Brazil’s humiliating 7-1 loss to Germany in the World Cup semi-finals.

Brazil has hosted one of the most memorable World Cups ever but the country’s dream of winning on home soil was not the only thing shattered by a ruthless Germany in an extraordinary match in Belo Horizonte.

The South American country’s pride took a battering as the carnival atmosphere that had swept over the samba nation gave way to a state of shock and disbelief following Brazil’s heaviest ever international defeat.

Brazil coach Luiz Felipe Scolari issued a heart-felt apology to a country that had spent more than $11 billion to host the World Cup and invested its heart and soul in making the tournament a success.

“My message for the Brazilian people is this. Please excuse us for this performance,” he said.

“I’m sorry that we weren’t able to get to the final – and we’re going to try to win the third place match. We still have something to play for.”

Germany played superbly but were aided by a woeful Brazilian defence, which conceded five goals in a devastating 18-minute burst in the first half.

An unmarked Thomas Mueller got the first from a corner after 11 minutes before Miroslav Klose struck to become the World Cup’s all-time leading scorer with 16 goals.

Toni Kroos grabbed two in three minutes before Sami Khedira added a fifth in the 29th minute as boos rang out around the Mineirao stadium and young children in the crowd started to cry.

German substitute Andre Schuerrle struck twice more late in the second half before Oscar scored a last-minute goal that was of little consolation to the five-times world champions, who had waited 64 years to try to bury the ghost of their 1950 final home defeat by Uruguay.

“Unfortunately, we couldn’t. I’m sorry, I’m sorry to all Brazilians, I just wanted to see them smile, everyone knows how important it was.”

Germany have the chance to win the World Cup for the fourth time when they play the winners of Wednesday’s semi-final between Argentina and the Netherlands in Sunday’s final in Rio de Janeiro.

Many fans at Copacabana Beach, who had been happily singing and dancing with excitement before the game, left the planned party before halftime.

In Germany, the celebrations were in full swing, with hundreds of thousands of people flocking to the avenue stretching from the Brandenburg Gate to the golden statue-topped Victory Column in Berlin. Organisers extended the fan zone to 1.3 kilometres in anticipation of the massive crowd who roared with excitement as each goal was banged into the Brazilian net.

“Five goals in 18 minutes. It’s clear that they were shocked and didn’t know what to do,” Germany coach Joachim Loew said.

“We played well in the first half obviously. But it continues. We need to be humble. We don’t want to overvalue this.”

Germany’s win came exactly 24 years to the day since their last World Cup triumph in 1990, when they beat Argentina in the final.

They lost to Brazil in the 2002 final and were knocked out in the semi-finals when they hosted the tournament in 2006.

“We had great hopes in 2006 too and you can feel the pressure that the hosts have in a match like this,” Loew said.

“All 200 million people here want you to get to the final. That can cause your players to tighten up. I feel sorry for him (Scolari). I think I know how he feels.”

Meanwhile, the Netherlands have concerns over striker Robin van Persie, who was suffering from stomach problems ahead of their game against Argentina in Sao Paulo.

Van Persie has been training separately from the squad and Dutch coach Louis van Gaal said he would not be able to make a decision on his fitness until the day of the game.

“I don’t know,” Van Gaal said when asked if his key striker would play. “Tomorrow I’ll have to take all these decisions but I can’t do that today.”

Off the field, Ray Whelan, chief executive of a hospitality firm arrested in connection with an investigation into VIP ticket scalping at the World Cup, was released after spending the night in custody.

Whelan was arrested as a result of Operation Jules Rimet in which 12 people have been arrested following investigations into the illegal resale of tickets for the tournament.

The investigation has further sullied the reputation of world soccer’s governing body FIFA, which was already facing allegations of bribery surrounding Qatar’s successful bid to host the 2022 World Cup.

Whelan’s company, MATCH, said the Englishman was released in Rio de Janeiro and that he will assist police with further enquiries. “MATCH have complete faith that the facts will establish that he has not violated any laws,” it said in a statement, adding that Whelan would continue working at the World Cup. – (Reuters)