Neither TRUTH nor RECONCILIATION in South Africa 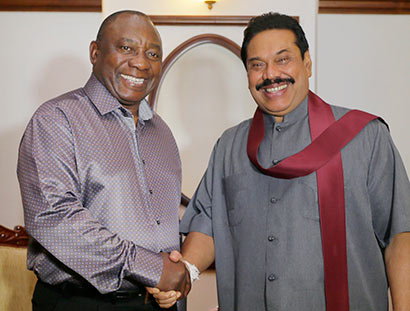 It would be interesting to see what Deputy President of South Africa, Cyril Ramaphosa who arrived in Sri Lanka has to say about the outcome of South Africa’s Truth and Reconciliation Commission established in 1996. Indigenous Black South Africans suffered because of policies of white rule. Sri Lanka’s case was one of 30 years of terror unleashed by LTTE upon all the communities living in Sri Lanka. If the TRC model attempted to whitewash and favor perpetrators – these were mostly the white apartheid rulers and included members of Nelson Mandela’s own party. It served the interest of both ANC and White apartheid rulers to reconcile and not have their crimes out in the open. Sri Lanka’s perpetrators and human rights violators were the LTTE. Therefore, on what ground and on whose advice is the GOSL considering adopting the South African TRC even if it is fine tuned? When it suited the West it was victor’s justice (Nuremberg Trials) and when it suits the West it is restorative justice as in South Africa because the worst perpetrators were white! While the reconciliation barometer poll finds 43% rarely or never speak to someone from another race! White rule that prevailed openly under apartheid continues to prevail in silence. A handful of elite blacks are happy to belong amongst the white while the rest of the blacks continue to suffer. In short, 5 million whites continue to rule 44million South African blacks.

Apartheid ran from 1948 to 1900. Electing Nelson Mandela in 1994 as President did not make any difference. The handover from white rule to black rule came with the compromise of amnesty – omitting accountability for human rights violations, which ANC was ready to compromise upon in view of its own guilt. However, 14,000 were killed during the 4 year negotiation period.

Previous Truth Commissions were held in Chile, El Salvador, Argentina, Uganda – ALL with no impact whatsoever and each one was fine-tuned from the former!

Our question is what has the TRC actually given the South Africans that suffered from apartheid in a nation of 49million that was violently ruled by just 8% whites who continue to own 70% of land?

Can South Africa’s TRC be a success story because NOW 10% blacks who make up the elite, control the stock market?

Inequality is worse than during apartheid. 60% of the population earns less than R42,000 per annum (about US$7,000), whereas 2.2% of the population has an income exceeding R360,000 per annum (about US$50,000). 4million blacks live on less than $1 a day. The promise by Mandela to redistribute 30% of land from whites to blacks was never honored. The skin colour factor still remains. More than 50 murders a day are committed throughout the country, which comes to more than 18,000 a year, a woman is raped every few minutes, and someone is robbed every few seconds. 6 million of its 49 million inhabitants are infected with the AIDS virus.

Good schools are in expensive neighborhoods and thus out of reach of blacks. Only 12% blacks attend higher school. Global competitiveness survey has placed South Africa last (148th place) in the quality of maths and science.

South Africa’s TRC was established through the Promotion of National Unity and Reconciliation Act No 34 of 1995. The TRC had 3 committees: the Human Rights Violations Committee / Amnesty Committee / Reparation & Rehabilitation Committee.

Victims of South Africa were naturally angry. Steve Biko was the anti-apartheid activist killed by white police. His name joins many other victim’s whose families claimed that the TRC robbed them of their right to justice. What a farce when victim stories were nicely tabulated but then told that no funds were available for reparation!

On what grounds is the ‘collective violence’ term being used. If apartheid meant that whites took over by force what rightfully belonged to black Africans and simply because the Africans fought against the violent actions of white rulers on what basis is this violence treated equally? Did the action not result in reaction? Violence begets violence and if blacks did not live in violence perpetrated by the whites they would not have themselves resorted to violence.

While the tamasha’s over forgiving took precedence why did inequality and lack of empowerment never take precedence? Is poverty not the root cause of most ills in the Third World? Let us not forget that Africa was drained and continues to be drained by imperialists and the blacks in power are joining the imperialists adding to the injury.

Legislation for South Africa’s TRC was formulated by NGOs and the Church leading us to question if repentance is necessary for forgiveness or can forgiveness come about without repentance and for what reasons should these be dictated by the Church and its beliefs only? If the TRC is meant to have replicated the Christian confession system (confess one’s sins and be absolved of all sins) both P W Botha and F W de Klerk refused to admit they had done wrong. What is the guarantee that the Church-based confession system in exchange for amnesty will not be used by an international court at a later date for war crimes when the possibilities of taking countries who have not signed the Rome Statute of the ICC is also possible?

The TRC let off the hook some of the worst perpetrators simply to record their stories. Disproportionate opportunity was given to white victims in testimonies of 21,000 victims with only 2000 appearing before public hearings. 7112 amnesty applications but only 849 amnesty granted while 5392 were refused. http://www.justice.gov.za/trc/amntrans/index.htm

The announcement of the Truth & Reconciliation Commission for South Africa certainly made news and was spurred by world press as moving towards the ‘miracle’ transition to democracy. Empty vessels make the most noise and South Africa’s story was one such.

The TRC hearings were almost entirely boycotted by whites. Many of those applying for amnesty did not even show remorse – (Amnesty-seeker Jacques Hechter, a police captain whom journalist David Goodman has described as “a particularly prolific assassin,” was not unusual in his boast: “I did a good job…. And I’d do it again…. I’m not really fuckin’ sorry for what I did.”)

If South Africans themselves believed that both the TRC and the Convention for a Democratic South Africa (CODESA) were political necessities that have not delivered 18years later the proof is in the pudding. CODESA focused on restoring political rights which gave ANC leaders power and glory but ignored economic power and ownership of land and inequality that remained very much under white control.

Restorative justice was all about saying sorry, apologizing and thereafter all was to be forgotten. That apology granted total amnesty with no legal entanglements. It was obviously early Christmas for perpetrators. Thus the systematic violence that black South Africans suffered since 1948 were never addressed. All that the victims got was to see their perpetrators face and accept apology while hearings were never heard on land issues, education systems, migrant labor system, role of companies that collaborated with and profited from apartheid. Under apartheid, mass removals of millions of blacks made room for white cities, white suburbs, white farms. Under apartheid, the average black rural woman had to walk eight miles each day for water and firewood. From 1990-1994, 69,000 black miners lost their lives in appall labor conditions.

How can Sri Lankan politicians agree to a political success story cheered by the West and cohorts which in reality will have no bearing for the victims of LTTE terror?

Simply because a handful of ANC leaders were elevated to be accepted by the elite society of White rulers is this the success story Ramposha will relate to Sri Lanka’s President?

Racial segregation existed in South Africa but it does not exist in Sri Lanka. Tamils have nothing to prove of being segregated from governance legislatively or constitutionally.

Sri Lankan Government is untiringly attempting to do whatever it takes to make the White West nations happy knowing that the multipronged attack against Sri Lanka in reality is to overthrow the Government and reduce the powers the majority holds by various reforms camouflaged under bogey of names – multiculturalism, secular democracy, education systems attempting denationalize the people removing the historical bondage, economic collapse via robust programs that is leaving generations in debt.

Sri Lankan leaders cannot be foolish not to realize that even those holding ministerial portfolios are conniving to remove legislative and constitutional powers that would clip the ability to hold the country together. These traitors are kept in Parliament enjoying taxpayers hard earned money.

If we are talking about truth – Sri Lankans and the world need to be told the truth. How did armed Tamil groups emerge (India). Who trained and armed these armed groups in the 1970s (India). How many countries ‘handled’ LTTE (Initially India but LTTE was used by the West to forward its own agendas). Who are involved (Western nations, Indian intelligence, Nordic nations, LTTE Diaspora, Foreign NGOs/INGOs, local sepoys and lascorins, local media). Truth must bring out these names into the open. Every man or woman who played a part (direct/indirect/covert/overt) must be named.

If restorative justice means that they are not going to be judicially punished then they must be shamed in public if this is the best deal we can get from Truth & Reconciliation. The perpetrators (especially those who pulled strings from behind the scene) must be made public. The people of Sri Lanka can be satisfied that at least their names have been publicly humiliated. We do not need to waste time, energy and money on Commissions that would end up fattening a handfuls bank accounts.

Sri Lanka is into the 5th year of post-conflict peace. Close to 12,000 LTTE cadres have gone through rehabilitation and most are integrated into society. What purpose would it serve to bring them once more into the open and to face victims that they obviously do not know when they were themselves only following instructions to kill? 5 years on would perpetrators be interested to relate how they carried out mayhem or wish to listen to the victims relate their anger for snuffing out the lives of their loved ones? This drama may be amusing to those watching but what purpose does it serve for either the victim or the perpetrator? Is the rehabilitation program not meant to ensure repetition of crimes do not prevail? All that the victim-offender dialogue does is to provide employment to those being trained as mediators. With perpetrators again exposed in public while the victim and perpetrator may reconcile what if the public knowing who the perpetrator is castigates him/her in public – how will he be able to face people in public?

As things stand the public in Sri Lanka know that 12,000 LTTE cadres surrendered and they were put through a rehabilitation program and reintegrated into society. The people are happy that 5 years on there is no incident of bomb, assassination or suicide mission. The people thus do not wish to even know who these LTTErs are so long as they do not get up to similar mischief and the public have faith in law enforcement and the Armed Forces because they are equipped to handle such scenarios. Thus, we do not see any reason for victim-perpetrators to meet and trade accusations, emotions and then depart after a simply ‘sorry’.

We would rather not know who these perpetrators are for their own conscience would deliver the karmic justice they deserve.

5 Responses to Neither TRUTH nor RECONCILIATION in South Africa

Home » Neither TRUTH nor RECONCILIATION in South Africa