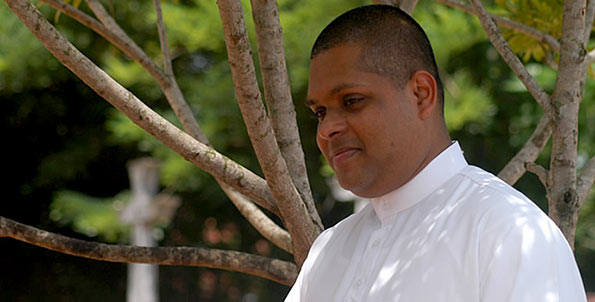 When the case was taken up before Colombo High Court Judge Gihan Kulathunga today (5), the indictment papers filed by the Attorney General were served.

The court then ordered that the defendant be released on a cash bail of Rs 500,000 and two personal bails of Rs 5 million each. The judge called for a report after obtaining the defendant’s fingerprints.

The court also barred the former Parliamentarian from leaving the country while he was ordered to hand over his passport to the court. The HC Judge stated that if the defendant wishes to travel abroad he could do so after obtaining the court’s permission.

The hearing of the case was postponed until October 01.

According to the AG’s Department, the irregularity was unearthed during an investigation conducted by the Criminal Investigations Department (CID) on a complaint received on 02.02.2015.

The CID investigation has revealed that Sajin de Vass Gunawardena has owned a group of companies under the name of ‘COSMOS’ which had 21 companies at the time he gave nominations to contest the parliamentary election in 2010.

Though he has resigned from the directorship of all those companies and transferred his shares to his wife before he became a member of the 14th Parliament, the evidence had revealed that he has effectively run the full operation of those companies even after he became an MP.

Though on paper he had distanced himself from those companies, the CID investigation revealed that Mr Gunawardena has made suspicious transactions using 7 out of the 21 companies.

He has allegedly deposited over Rs 458.73 million in this manner in the accounts of those companies. Evidence was disclosed that Mr. Gunawardena used to bring monies in cash and asked to deposit the same in an account of a company named by him.

The bank details of the accounts maintained in the name of those companies have reflected these deposits. It has been further revealed that Mr. Gunawardena used to withdraw cash from those same companies though he had not had any legal bearing to do so as he has rescinded his ownership and directorship of those companies.

The investigators found that neither Mr. Gunawardena nor his wife in their own admission have such a known income comparable to the vast sums of money he has made as deposits in those companies. It is pertinent to note that much of those deposits were made during his tenure as an MP in the 14th parliament, the department said.

The deficit between all of those deposits and his and his wife’s income including company drawings he has made illegally, has been identified as Rs 306,268,194.76.

The AG’s Department further said that former MP Sajin de Vass Gunawardena has failed to explain how he earned such an income to make those deposits especially in a time during which he acted as an elected Member of the Parliament.