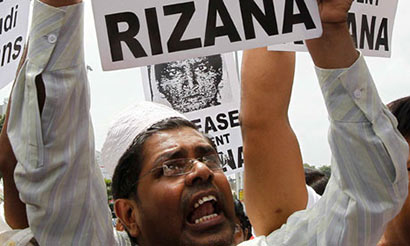 More than 45 foreign maids are facing execution on death row in Saudi Arabia, the Observer has learned, amid growing international outrage at the treatment of migrant workers.

The startling figure emerged after Saudi Arabia beheaded a 24-year-old Sri Lankan domestic worker, Rizana Nafeek, in the face of appeals for clemency from around the world.

The exact number of maids on death row is almost certainly higher, but Saudi authorities do not publish official figures. Indonesians are believed to account for the majority of those facing a death sentence. Human rights groups say 45 Indonesian women are on death row, and five have exhausted the legal process.

Figures for other nationalities are harder to come by. Rights groups say they believe there are also Sri Lankan, Filipina, Indian and Ethiopian maids facing the death penalty.

Nafeek’s execution drew condemnation from Human Rights Watch and Amnesty International, both of which have campaigned against the death penalty in Saudi Arabia. They say many migrant domestic workers, drawn to the Middle East by the prospect of employment with well-off families, face abuse.

“Some domestic workers find kind employers who treat them well, but others face intense exploitation and abuse, ranging from months of hard work without pay to physical violence to slavery-like conditions,” said Nisha Varia from Human Rights Watch. There are about 1.5 million foreign maids in Saudi Arabia, including about 375,000 Sri Lankans.

“The Saudi justice system is characterised by arbitrary arrests, unfair trials and harsh punishments,” she said. “Migrants are at high risk of being victims of spurious charges. A domestic worker facing abuse or exploitation from her employer might run away and then be accused of theft. Employers may accuse domestic workers, especially those from Indonesia, of witchcraft. Victims of rape and sexual assault are at risk of being accused of adultery and fornication.”

Migrants are also said to struggle to gain access to lawyers and translators and it is not uncommon, according to Human Rights Watch, for the Saudi authorities to prevent those arrested from contacting their embassies.

Among those awaiting execution is 40-year-old Satinah binti Jumadi Ahmad, an Indonesian maid convicted of murdering her employer. According to Anis Hidayah, executive director of Indonesian rights group Migrant Care, she was arrested three months after arriving to work in Saudi Arabia in September 2006. Three years later she called her family to tell them she had been sentenced to death. Hidayah said the maid had killed her employer, Noura al-Gharib, during an argument.

“She was cooking in the kitchen and her employer screamed at her angrily. Her employer grabbed her hair and tried to bang her head into the wall. Satinah defended herself by spontaneously beating her employer with bread dough and struck the nape of her neck and she fell down.”

Other reports say Satinah snapped after she was accused of stealing money and that she had suffered regular abuse from her employer. The victim’s family has demanded 10m riyals (£1.6m) in blood money, which would save Satinah. The Indonesian government says it is prepared to make a payment, although the figure it is reported to have offered is considerably lower than that demanded by the family. A moratorium was placed on sending migrant workers to Saudi Arabia after an Indonesian maid was beheaded in 2011.

Four other women – Tuti Tursilawati binti Warjuki, Darmawati binti Taryani, Siti Aminah and Siti Zaenab – are also on death row. Tursilawati, 27, claims she killed her employer when he tried to rape her in 2010 after months of sexual abuse. Zaenab was also convicted of killing her employer, while Aminah and Taryani were sentenced to death for the murder of another migrant worker.

“In many cases, they’re subjected to whole trials where they can’t understand the proceedings, which are conducted solely in Arabic, and without translation. They are often not given access to lawyers or to consular assistance.”

Mamoun said poor workers from the Indian subcontinent, south-east Asia and Africa did not have the contacts and influence needed to balance a justice system that was weighted against them. “All countries should be advising their residents who might be thinking of working in Saudi Arabia of the risks of mistreatment in detention, of an unfair trial and even of execution. The risks are very real and could be deadly.” Amnesty said it knew of more than 120 people – mostly foreign nationals – on death row.

Saudi officials said that Rizana Nafeek was beheaded in public near Riyadh last Wednesday. She had been sentenced to death for the murder of a baby in her care, although she claimed that the child died as a result of a choking accident.

The Sri Lankan government reacted angrily and condemned the execution. Members of the country’s parliament observed a one-minute silence in her memory. Her supporters had protested that she was only 17 at the time of the child’s death in 2005, and that international law prohibits the execution of minors. It appears that a recruitment agency falsified the age on her passport to allow her to travel to Saudi Arabia.

Sri Lankan president Mahinda Rajapaksa had requested a stay of execution to allow time for a financial settlement to be agreed with the family of the child.

Arrived in Saudi Arabia from Indonesia in 2009 and is reported to have suffered sexual abuse at the hands of her employer until, in May 2010, she beat him to death with a stick after he tried to rape her. Supporters say that she received no legal representation for the first two months of her trial; she was subsequently found guilty and sentenced to death. The family of the dead man are reported to have asked for her execution rather than blood money.

Travelled to Saudi Arabia to work in 2006 but was arrested in 2007 for killing her female employer. Over the next two years she faced five legal hearings, which concluded that she was guilty of murder and should be executed. Last month the Indonesian government was reported to have offered to pay blood money of 2.5m riyals (£413,260), a quarter of the sum required to cancel the death penalty. Negotiations are said to be continuing.

Migrant Care, which has campaigned for Satinah’s release, said reports that a deal had been struck for her release were premature.

Has been on death row since she was sentenced in 1999. Zaenab was accused of killing her female employer by stabbing her 18 times. She had travelled to Saudi Arabia from south-east Asia a year earlier to work as a maid. She is reported to have twice been saved from execution by the intervention of Indonesian presidents, but remains in custody. Amnesty said she confessed to the murder while suffering mental health problems