Secretary General of the Colombo Plan calls on President Rajapaksa 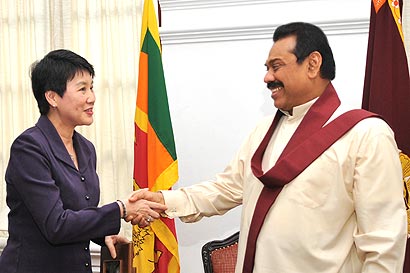 The Secretary General of the Colombo Plan Ms. Dato Patricia Yoon-Moi Chia paid a courtesy call on President Mahinda Rajapaksa at the Temple Trees this morning on 10 August. During the brief meeting with the President, Ms Dato Chia explained the current role of the Colombo Plan withing the region and their projects in Sri Lanka. Secretary to the President, Lalith Weeratunga was present at the occasion.

Originally it was called the Colombo Plan for Cooperative Economic Development in South and Southeast Asia. It has grown from a group of seven Commonwealth nations Australia, Britain, Canada, Ceylon, India, New Zealand and Pakistan into an international organisation of 26, including non-Commonwealth countries. When it adopted a new constitution in 1977, its name was changed to “The Colombo Plan for Cooperative Economic and Social Development in Asia and the Pacific” to reflect the expanded composition of its enhanced membership and the scope of its activities. Currently it has 25 members, including countries in the Asia-Pacific region, non Commonwealth and countries belonging to regional grouping such as ASEAN (Association of South East Asian Nations) and SAARC (South Asian Association for Regional Cooperation).

The incumbent Secretary-General, Dato’ Patricia Yoon-Moi Chia from Malaysia assumed duties on 7 August 2007, as the 20th head of the Organization and also the first Asian female to helm this position. She came to Sri Lanka to attend the Colombo Plan International Society meeting which was held in Colombo recently.