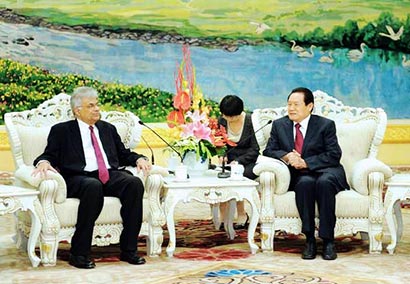 BEIJING, June 11 (Xinhua) — A senior official of the Communist Party of China (CPC) on Monday vowed to enhance party-to-party exchanges with Sri Lanka so as to promote common development.

Zhou Yongkang, a member of the Standing Committee of the Political Bureau of the CPC Central Committee, made the pledge during a meeting with Ranil Wickremesinghe, head of the South Asian state’s United National Party (UNP).

Zhou hailed the current China-Sri Lanka ties, saying it has become an example of friendly cooperation between countries with different social systems.

He spoke highly of Sri Lanka’s political, economic and social development since the end of domestic armed conflicts three years ago, noting that China will boost exchanges with Sri Lanka’s parties, including the UNP.

Wickremesinghe, former prime minister of Sri Lanka, voiced appreciation for the CPC’s achievements in leading the country’s development, vowed to learn from China’s experiences and thanked China for its constant support.
Source: Xinhua