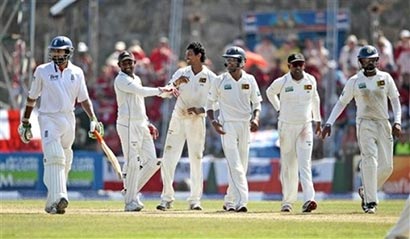 The first Test between Sri Lanka and England is set for a fascinating finish after a dramatic second day’s play where 17 wickets fell, 12 of them to spinners, as England fought back admirably after conceding a first innings lead of 125 runs here at the Galle International Stadium yesterday.

Sri Lanka were 84 for five at stumps yesterday with a lead of 209 runs and enjoying a slight edge, but they certainly could have batted England out of the game had they batted with more application. However, with the ball turning square, spinners Rangana Herath and Suraj Randiv could come in very handy here and the prospects are that the game will end with two days to spare.

Sri Lanka added 29 runs to their overnight total as their first innings ended on 318 with Mahela Jayawardene dismissed last for a brilliant 180. James Anderson finished with figures of five for 72.

England lost Alastair Cook in the second over for a duck and as expected spin was introduced early with Herath coming onto the attack in the ninth over. He struck twice in his second and third overs claiming the wickets of Jonathan Trott and Andrew Strauss. Trott was smartly stumped by wicket-keeper Prasanna Jayawardene while Strauss was ruled leg before wicket after Sri Lankans challenged umpire Asad Rauf’s decision successfully.

Herath bowled with impeccable control and England batsmen did themselves no favours by trying to block him on the back foot. Of his six wickets, four were leg before wicket dismissals as he became only the fourth Sri Lankan after Muttiah Muralitharan, Chaminda Vaas and Rumesh Ratnayake to take a five-wicket haul against England.

After being 57 for three at lunch, England slumped further in the afternoon session as six wickets fell and tea was delayed by half an hour as Sri Lanka searched for the last wicket. England’s struggles against spin during their winter series against Pakistan was the reason why they suffered a 3-0 whitewash and Ian Bell in particular had a disastrous tour managing a top score of 29 in six innings.

Bell was the top scorer for England yesterday with 52 runs off 87 balls with eight fours and a six. There was plenty of support for him from the tail as Stuart Broad (28), Graeme Swann (24) and James Anderson (23) all came up with useful contributions.

Graeme Swann had failed to pick up a wicket in Sri Lanka’s first innings, but with plenty of assistance from the track yesterday, he tested the batsmen with some teasing deliveries and the attacking field that Strauss employed certainly helped him. He finished with four for 28 in 12 overs.

While there was some tight bowling, Sri Lanka’s batsmen had themselves to blame as some of them perished attempting ambitious strokes instead of playing the waiting game.

While Tillakaratne Dilshan fell for a duck when he played the wrong line in Stuart Broad’s first over and towards the end of day’s play, Thilan Samaraweera, who had done the hard work and was on 36 charged down the track to Swann without any purpose and was stumped by Prior with three overs remaining for stumps.