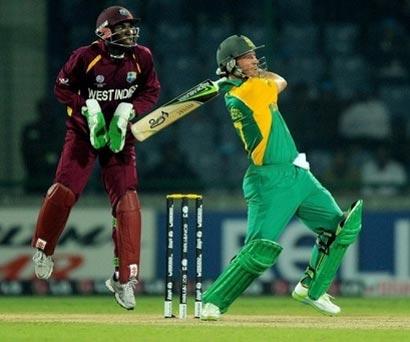 NEW DELHI (AFP) – Debutant leg-spinner Imran Tahir snared four wickets and AB de Villiers struck 107 not out as South Africa coasted to a seven-wicket win over the West Indies in the World Cup on Thursday.

Tahir (4-41) and off-spinner Johan Botha (2-48) shared six wickets to help South Africa bowl out the West Indies for 222 off 47.3 overs before de Villiers slammed his 10th one-day century to seal the fate of their rivals.

JP Duminy (42 not out) hit the winning run as South Africa reached the target with 43 balls to spare in their opening day-night Group B clash at the Feroz Shah Kotla stadium.

De Villiers put on 119 runs for the third wicket with captain Graeme Smith (45) after South Africa had been reduced to 20-2 following the dismissal of Hashim Amla (14) and Jacques Kallis (four) in the space of five runs.

“Winning the toss was nice and we started well,” said Smith. “We managed to peg them back in the middle. Once you pick a wicket, you can build pressure and we managed to pick up wickets in clusters.

“I just wanted to bat through with AB and build a partnership. AB went faster than run a ball and paced it really well.”

Amla was caught by wicketkeeper Devon Thomas off paceman Kemar Roach and Kallis offered a catch in the slips after misjudging a delivery from left-arm spinner Sulieman Benn.

De Villiers, named man of the match, remained calm despite the twin setback, racing to his half-century with a six off part-time spinner Chris Gayle and carting Benn for another that sailed over long-off.

Tahir and Botha earlier justified the decision of Smith to field three specialist spinners on a ground which was hosting its first international in a year after being banned for a dangerous playing surface.

Darren Bravo led the West Indies fightback with an 82-ball 73 while his older half-brother Dwayne chipped in with a 37-ball 40 with three sixes and a four after the Caribbean side were put in to bat.

Bravo also shared 111 runs for the second wicket with opener Devon Smith after Gayle was dismissed by Botha off the third ball of the innings.

“We had an opportunity to get a lot more runs,” said West Indies captain Darren Sammy.

“There were a few positives, Darren Bravo played really well and we hope he can continue like this. But we kept losing wickets and it did not help.”

Botha (2-48) struck again in the 24th over, just when Bravo and Devon Smith were threatening to put up a huge partnership.

Tahir, 31, picked up his first wicket in one-day internationals in his third over when he caught Devon Smith (36) off his own bowling and celebrated it by kissing the South African badge on his shirt.

The Pakistan-born bowler picked up another wicket in his next over when he had the veteran Ramnaresh Sarwan (two) trapped lbw.

Sarwan asked for a review of the decision but replays showed the ball would have hit the top of the middle stump.

Tahir, who was warned twice for straying on the pitch, was unlucky not to collect a third wicket just three balls later, grassing a return catch off Dwayne Bravo despite a spirited attempt.

He was not to be denied for long though, removing Shivnarine Chanderpaul and Devon Thomas with his guile and precision before Dale Steyn (3-24) sent back Pollard, Sammy and Benn in a quick three-wicket burst.

West Indies’ misery was compounded by a freak injury to Dwayne Bravo who fell in his follow-through, hurting his left knee. He bowled just 2.1 overs and did not take further part in the match.