South Africa prevail in the battle of nerves 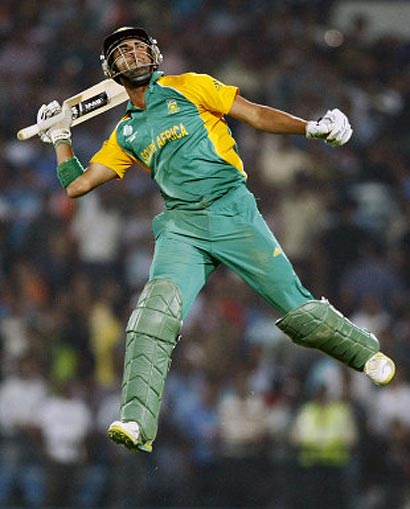 In a fascinating chase, with their choking past hovering over them, South Africa held their nerve to clinch a thriller in Nagpur. Jacques Kallis and Hashim Amla set it up, AB de Villiers pushed them close, JP Duminy and Johan Botha pumped in oxygen with big hits, Faf du Plessis held one end up and Robin Peterson shoved them past the line in the final over.

They needed 13 to win and there would have been the temptation to give the ball to Harbhajan Singh, who had one over left and had given away just five in his last, but MS Dhoni plumped for Ashish Nehra. Peterson inside edged the first to the fine-leg boundary, walloped the second over wide long-on for a game-breaking hit, ran madly to get two of the third before sealing it with a scorching cover drive.

India were left ruing their sensational collapse in the batting Powerplay, when they lost four wickets for 30 runs, and crumbled from 267 for 1, in the 40th over, to be bowled out for 296. Later, Dhoni had strong words about that collapse: “You don’t play for the crowd, you play for the country.”

The game itself swung crazily on each of those moments. South Africa had just lost Amla to a delivery that reared up alarmingly from Harbhajan when Kallis deployed the sweep and the paddle scoop against the same bowler to settle the nerves. South Africa were 114 for 2 at the end of the 30 overs at the end of those sweeps and the game hung in the balance.

Dhoni got into the act to run out Kallis. The throw from Harbhajan was dying away from the off stump when Dhoni lunged across, collected and swivelled to break the stumps. With Kallis’ fall, South Africa needed 124 runs from just over 14 overs and de Villiers immediately took the batting Powerplay.

The game turned again in the 40th over, Zaheer’s ninth, when South Africa looted 17 runs. de Villiers ragged a reverse-sweep to the fine-leg boundary, whiplashed another over point before Duminy walloped a slower one for a straight six to leave South Africa leaving 79 runs from 60 balls. It was then Harbhajan shoved the game into a thrilling climax.

Harbhajan had been giving de Villiers lip ever since he was hit for a six in the 32nd over. Eyeballs bulged, the motormouth worked over time and de Villiers would walk away, shaking his head. That contest was consummated when Harbhajan returned in the final Powerplay over, the 41st of the innings. de Villiers struck the first blow, with an audacious reverse whack over backward point but slog swept the next one straight to midwicket to leave South Africa still needing 74 from 57.

Things got tighter in the 43rd over when Harbhajan slipped a quick delivery down the leg side, past the advancing Duminy, and though Dhoni fumbled the take, he recovered to finish the stumping. India tightened the screws further when Munaf Patel trapped Morne van Wyk lbw in the 44th over, just moments after Gambhir dropped van Wyk at deep midwicket.

In the 48th over, Botha swiped Munaf through midwicket and crashed a six over the straight boundary to push South Africa ahead but fell off the next ball, miscuing a slower one over cover where Suresh Raina, the substitute fielder, took a tough catch. Zaheer gave away just four runs in the 49th over but Petersen settled the issue in the final one.

India lost the game in a manic self-destructive display in the batting Powerplay that they took in the 39th over. India were strolling at 253 for 1 but lost four wickets for 30 runs in the Powerplay and their last nine for 29 to collapse to 296.

In a sweet moment of redemption, it was the pair of Dale Steyn and Morne Morkel, who bled runs with the new ball, who did the damage during this manic phase. Sachin Tendulkar fell to an across-the-line hoick, his first ugly shot of the day, in the 40th over to Morne Morkel. Steyn had a double strike in the next over: Gambhir backed outside leg and scooped a slower one to mid-off and Yusuf Pathan blasted to cover. Things got worse when Yuvraj Singh swung a full toss to long-on off the final delivery of the Powerplay, and it turned chaotic when Virat Kohli gave a tame return catch to Peterson. In the space of a few minutes, the game had spiraled out of India’s control and returned to balance. Steyn even went on to complete a five-for, something that was scarcely believable when he was leaking runs with the new ball, when he cleaned up the tail.

Until that stunning phase of play, it was all India. Until then, even 375 seemed a possibility. If Virender Sehwag pumped in the adrenalin, Tendulkar oozed class. There was not a single shot that looked risky and yet he played all the shots, even a hooked six, a shot that he doesn’t play too often these days. Tendulkar faced just 20 balls in the first ten overs but had raced away to 35, and his fifty came off 33 balls. It was in the eighth over, from Morkel, that he really got going with an awesome thump through the covers, which was followed by a gorgeous straight drive. Like always, he held his pose even as Morkel was down on the mat. It was a moment that perfectly caught the one-sided battle.

When Steyn fired a bouncer in the 10th over, Tendulkar unfurled a stylish hook to deposit it beyond the backward square-leg boundary. When Jacques Kallis bowled a slower one, Tendulkar glided forward and across to whip the off cutter past mid-on. Unlike Sehwag, who kept backing away to the leg to try hit everything to the off, and fell in the process, Tendulkar played the spinners as per the demands of the ball but of course on his own terms. It should have been his night but cruelly it was his shot that triggered a stunning implosion, which proved the difference in the end.

Home » South Africa prevail in the battle of nerves