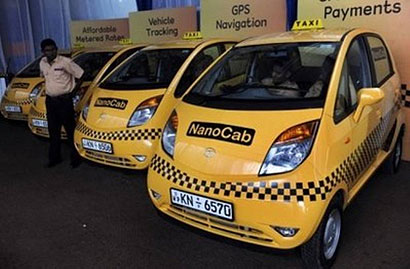 Taxi drivers in Sri Lanka’s capital held up traffic today, demanding the government should stop allowing anymore use Tata Nanos on the streets that offer stiff competition to the ubiquitous three-wheelers.

Hundreds of three-wheel taxis choked parts of the city for over an hour to protest against a taxi company, linked to a ruling party politician, from using a fleet of Nanos.

The politician was seen at the wheel of a Nano with President Mahinda Rajapakse at the passenger seat this week after Nano Cab company launched the cheaper taxi service earlier this month.

The Federation of Self-Employees (FOSE) said their members would lose business if the Nano cabs were allowed to expand.

The cab company had said it wants to increase the current fleet of 45 to 200 by the end of the year.

FOSE said President Rajapakse had promised in his election manifesto to grant them tax concessions to help reduce environment pollution caused by the Indian-made three wheelers, which have become the common man’s taxi.

The Nano service is offered at a lower price than air-conditioned cars and their fares are comparable to three wheeler charges.

“we are going to lose our jobs and the nano cabs will take over our taxi stands,” a spokesman for the protesters said.

11 Responses to Sri Lanka autorickshaw drivers say no to Nano