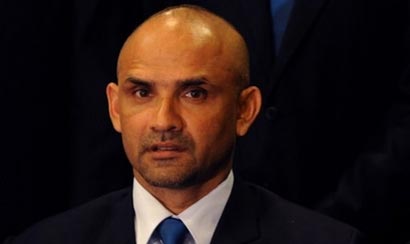 COLOMBO (AFP) – Sri Lanka will have to adjust quickly to the Test format as well as different wickets if they are to challenge England in their backyard, batting coach Marvan Atapattu said Tuesday.

“The biggest challenge is to adjust to English conditions,” Atapattu said as the bulk of Sri Lankan touring party left for England for a two-month tour.

Senior players Mahela Jayawardene and Kumar Sangakkara, as well as a few others, will join the squad later after completing their commitments in the Indian Premier League, a lucrative franchise-owned Twenty20 competition.

The IPL players will hardly get time to acclimatise as they will arrive just ahead of the second and last practice game against England Lions from May 19.

With a new skipper in Tillakaratne Dilshan and an overhauled team management, the task will be cut out for the Sri Lankans against a side whose last Test outing saw them thrash Australia in the Ashes.

Sri Lanka last held a test series at home against the West Indies in November-December 2010 but all the three games were ruined by rain.

“We are playing a Test series after after a gap of a few months. Winning the Test series in England is our aim,” Atapattu added.

The Sri Lankans are set to play three Tests, a Twenty20 international and five one-dayers during the England tour, which begins with a three-day practice match against Middlesex at Uxbridge from May 14.

The first Test in Cardiff begins on May 26.

“A (Test) win will make it easier for our preparation work for the one-day and T20 games,” said Atapattu, a former Sri Lankan skipper.

The away side are also without retired spin great Muttiah Muralitharan who shaped the team’s win in a one-off Test at the Oval in 1998 with a rich haul of 16 wickets.

Sri Lanka are yet to win a Test series in England with their best result so far being a 1-1 draw in 2006.

It was Muralitharan again who starred for Sri Lanka in that series, taking eight wickets in the second innings of the second Test at Trent Bridge to shape a 134-run win for his team.

Atapattu however played down the absence of the spin legend, saying the tour offered a fine opportunity for fringe players like Farveez Maharoof and Kaushal Silva to prove their credentials.

Maharoof, currently playing county cricket for Lancashire, made an impressive start to the season with a hundred on his debut against Somerset at Liverpool.

Silva, 24, is uncapped but has an impressive first-class average of 45 and has been picked up as a back-up for Prasanna Jayawardene.