Sri Lanka has suffered a ‘coup without guns’: parliament speaker 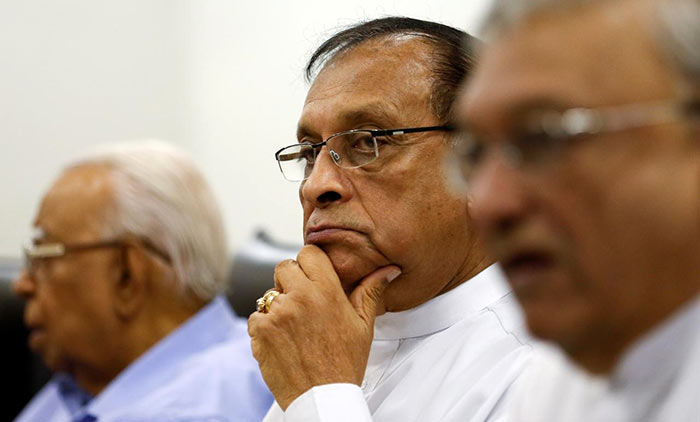 Sri Lanka’s parliamentary speaker has called the president’s sacking of the prime minister to bring a former leader back to power a non-violent coup d’etat.

Speaker Karu Jayasuriya is a key figure in the political standoff that started on Oct. 26, when President Maithripala Sirisena fired Prime Minister Ranil Wickremesinghe and replaced him with former president Mahinda Rajapaksa.

Wickremesinghe is refusing to vacate his prime ministerial residence and insists he remains in office until voted out by parliament. The president had suspended parliament, a move Rajapaksa’s opponents say is aimed at preventing it from rejecting his return to power.

“The entire series of events can only be described as a coup, albeit one without the use of tanks and guns,” Speaker Jayasuriya said in a letter dated Nov. 5 to diplomats and foreign missions, adding the “entire matter was pre-planned”.

Jayasuriya says the majority of parliamentarians view the change in prime minister as unconstitutional. In the letter he said some of them were offered bribes and ministerial jobs to support the new government.

He accused Sirisena of acting “contrary to all norms of transparency, decency, democracy and good governance, and contrary to the constitution which he has sworn to uphold and defend.”

Sirisena says he fired Wickremesinghe because he was trying to implement “a new, extreme liberal political concept by giving more priority for foreign policies and neglecting the local people’s sentiment,” and denies acting unconstitutionally.

Rajapaksa, under whose rule Sri Lanka achieved its 2009 victory in a decades-long conflict against rebels from the Tamil minority, is seen as a hero by many among Sri Lanka’s Buddhist majority. He has been accused by diplomats of human rights abuses during the war, which he denies.

India and Western countries also worry about his close ties to China, which loaned Sri Lanka billions of dollars for infrastructure projects during his rule.

A foreign ministry official told Reuters that some foreign envoys have said they will only recognize Rajapaksa as prime minister after he can prove he has support of a majority in parliament.

Sirisena has recalled the parliament on Nov. 14. Independent political analysts told Reuters a majority in the 225-member legislature is against the sudden sacking of Wickremesinghe.

2 Responses to Sri Lanka has suffered a ‘coup without guns’: parliament speaker