Sri Lanka healthcare on verge of collapse in economic crisis 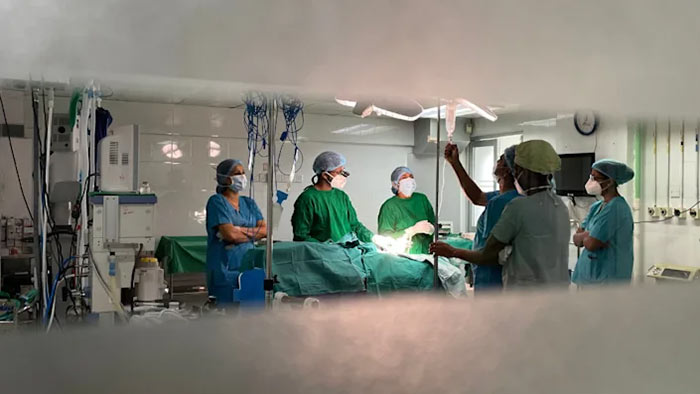 Doctors across Sri Lanka say hospitals are running out of medicines and essential supplies as the country’s economic crisis worsens. They fear a health catastrophe if international help doesn’t arrive soon.

“Day by day things are running out. If we get to the point where it’s zero, then I don’t know what will happen,” says Dr. Gnanasekaram anxiously.

As secretary of Sri Lanka’s Association of Medical Specialists, the surgeon has been busy compiling lists of which medicines are running low at hospitals in the capital Colombo.

“We are short of medical drugs, anaesthetic drugs, implants, suture materials. We are nearly exhausting the stock.

“Healthcare services are going to collapse unless there’s immediate relief,” he says.

I meet Dr Gnanasekaram between consultations – he says he’s hoping this interview will encourage international donors to come forward. 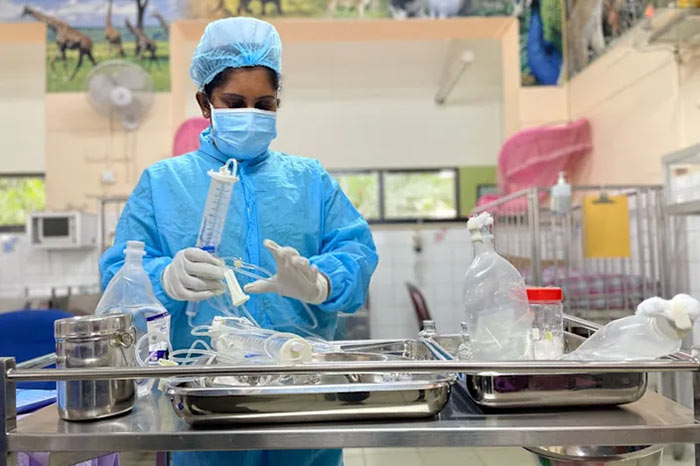 Doctors say hospitals are running out of medicines and essential supplies

“If that happens there may be a situation where we won’t be able to save patients’ lives.”

Sri Lanka is in the midst of its worst economic crisis in history. The country imports around 85% of its medical supplies. But with foreign currency reserves running low, essential drugs are now difficult to obtain.

At his office in Sri Lanka’s largest children’s hospital, Lady Ridgeway, medical director Dr. Wijesuriya shows me a piece of paper with a list of essential drugs on it. 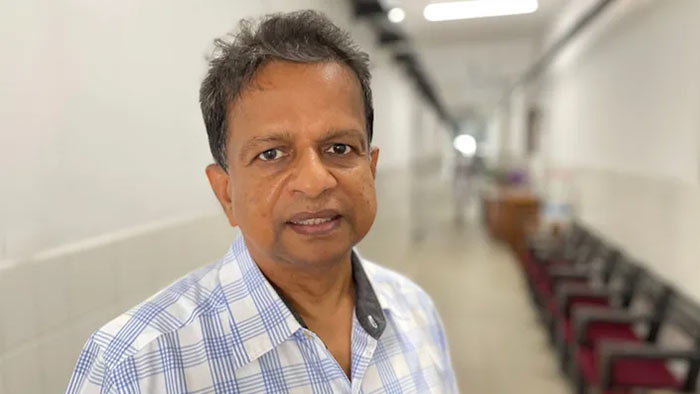 Dr. Wijesuriya has a list of vital drugs running short – and in some cases out of stock

Next to the name of the medicine, there’s a column showing availability.

Some like atracurium – used in anaesthetics – have only two months of stock left. But as I scan the list further, other drugs are in even shorter supply.

There’s only two weeks left of the painkiller fentanyl, while three different types of antibiotics are already “out of stock”.

For now Dr. Wijesuriya says he’s managing these shortages with substitutions. He remains optimistic that the government will find a way to get him what is needed for his patients. 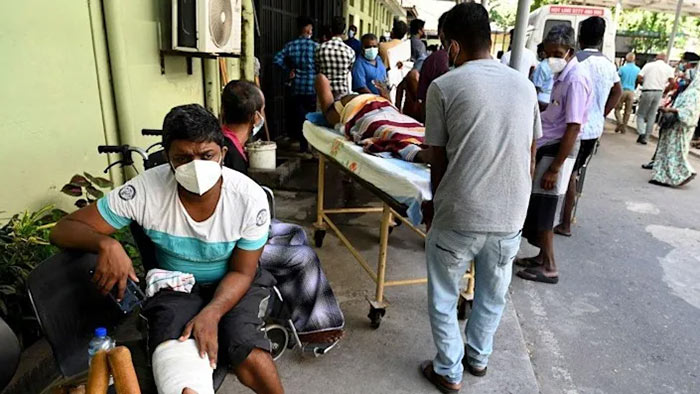 Frontline doctors are far less upbeat. Many say they’ve been told by the government they can’t speak openly to the media about the situation, with only union representatives and hospital directors authorised to do so.

In a statement Sri Lanka’s government initially denied medicines were running out, even as doctors reported problems.

A day later the Department of Government Information issued a correction, admitting there is a shortage of some drugs and equipment. 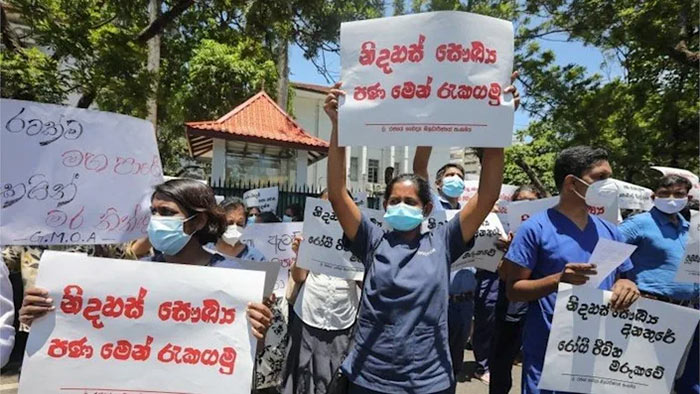 Documents seen by the BBC, interviews with medical unions and testimony from frontline doctors reveal that hospitals across the nation are in desperate need of a range of life-saving drugs and equipment.

Medical staff have told the BBC the crunch in supplies has forced them to suspend non-essential operations, and reuse or ration some equipment.

Dr. Nishan (not his real name) works at a cancer hospital in the Eastern province.

“In two weeks’ time we may have to stop most surgeries and only do emergencies,” he told me as he reeled off a list of essentials like IV fluids, paracetamol, and antibiotics that his team are struggling to get hold of.

“There may be a time when we have to even stop treating cancer patients,” he warned.

Dr. Nishan is from an area hit hard by the country’s civil war. Working as a doctor in conflict has its many challenges, but this economic crisis comes with many others.

“During the war we had limitations, but we could still get things from the ministry in Colombo,” he said.

“But now even the health ministry doesn’t have supplies. During wartime we were not so frustrated and desperate as we are now.” 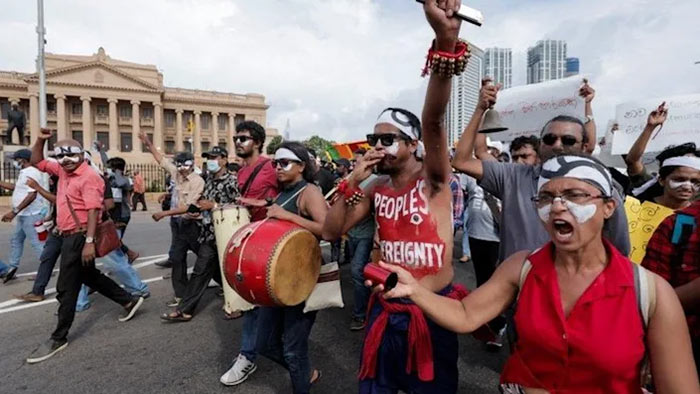 In Colombo, protesters against food price hikes have called on the president to quit

Sri Lanka runs a free national healthcare system, which millions of people on the island rely on.

Kasun (not his real name), who works at a hospital in the Southern province, said it’s only a matter of days before drugs run out unless supplies come in.

“We are being told to use what we have sparingly, but there’s no real solution. I feel helpless.”

The largest doctor’s union on the island, the Government Medical Officers’ Association (GMOA), has blamed the crisis on poor financial and economic management and is calling on people from overseas to donate supplies.

It has published an extensive list of items which are desperately needed, which includes antibiotics, paracetamol, blood pressure medicine and anti-depressants.

WhatsApp groups of Sri Lankan doctors around the world are busily trying to source drugs, as the diaspora pitches in to help at this desperate time.

“We have almost used all the stocks and no ET tubes will be available in a few weeks,” he said. Dr. Kumara said he had instructed staff to clean and sterilise tubes in case they needed to be reused.

After his message went out, doctors around the world sprang into action to help. Within 24 hours, he said he was donated an “adequate amount” of ET tubes for his hospital.

But he says other shortages remain, and is working with the Save A Baby charity to help co-ordinate efforts.

Dr. Anver Hamdani, who was recently appointed by the Sri Lankan health ministry to co-ordinate efforts to keep healthcare services running, told the BBC he and his colleagues are working to overcome the shortages.

He’s hoping pledges from overseas governments including a credit line from India, the main supplier of Sri Lanka’s medicines, plus donations which are coming in, will prevent the looming crisis.

“We have to admit this is a challenging period – there is a reasonable amount of shortage of certain things.

“It is not yet under control, it in the process of being controlled,” he said conceding that once the short term supply problem was fixed, a sustainable financing solution will still need to be found.

Sri Lanka’s medical crisis is compounded by the added pressure staff themselves are having to face.

Kasun says workers at his hospital have been told overtime payments will be cut as budgets are strained.

Like millions across the country doctors are struggling to obtain the basics. Many say they are queuing for hours to get fuel for their cars to get to hospital.

“It’s becoming very difficult to live, salaries aren’t going up but the cost of living has skyrocketed,” he said.

As tens of thousands have taken to the streets to protest at rising food and fuel prices, doctors, nurses and medical students have joined the demonstrations.

Back at his office Dr. Gnanaksekaran pleaded to the world for help.

“We need supplies to come in whatever form, whether it’s another country’s government, or an individual donation.

“As professionals we are apolitical, but we are concerned about our patients.

“We just want to be able to treat them – we don’t want them to die.”