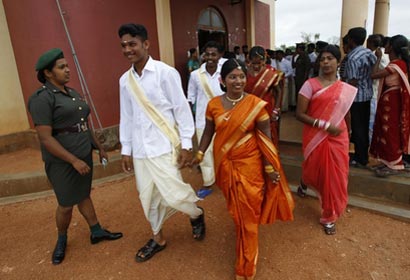 A total of 53 couples were issued marriage certificates in the northern district of Vavuniya, where they are being held in military custody following the defeat of the Tamil Tiger separatist movement in May last year.

Commissioner General of Rehabilitation, Brigadier Sudantha Ranasinghe, said most of the ex-combatants had been living together without formalising their partnerships.

“Some have children. It’s only fair we legalise their marriages as part of their rehabilitation process,” Ranasinghe said.

The former militants are being rehabilitated at a military-run camp in Vavuniya, 255 kilometres (160 miles) north of Colombo, after they surrendered to the army last year.

Some 10,000 combatants gave themselves up when government troops wiped out the Tigers’ top leadership and ended the 37-year conflict which had claimed up to 100,000 lives, according to United Nations estimates.

Oberoi’s presence added glamour to Sunday’s celebration and the actor later spoke to some of the newly married couples.