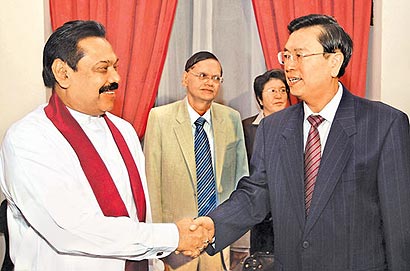 China reiterated its commitment to Sri Lanka’s economic development, with its investment and association with the major economic, infrastructure and socio-cultural development projects in the country, when visiting Chinese Vice Premier Zhang Dejiang was hosted to a breakfast meeting with President Mahinda Rajapaksa at Janadhipathi Mandiraya Saturday.

At the cordial and constructive discussions, the Chinese Vice Premier, leading a large delegation from China, discussed the progress of key aspects of economic co-operation between Sri Lanka and China, and the progress of projects such as the Colombo-Katunayake Expressway, extension of the railway from Matara to Kataragama, the Norochcholai Coal Power Project, the Hambantota Port Development, the Mattala International Airport and the Centre for the Performing Arts in Colombo, where construction work was proceeding at speed to achieve agreed targets for completion.

President Rajapaksa thanked China for its continued assistance to Sri Lanka, in the country’s efforts to defeat terrorism and for economic and social development both during the conflict and after.

The Chinese Vice-Premier said his country reciprocated Sri Lanka’s continued gesture of friendship with China, especially in the support for the One-China Policy, and also recalled Sri Lanka’s support for China to gain its rightful seat at the UN Security Council.

He also stated there were two clear reasons for President Rajapaksa’s overwhelming political success as seen by the results of the recent elections, being due to his success in liberating the entire country from terrorism and his commitment to economic development to bring the dividends of peace to the people.

The meeting between President Rajapaksa and Vice Premier Zhang Dejiang followed the signing of six other agreements between China and Sri Lanka for economic and technical co-operation, highways development, enhanced co-operation in Information Technology and Communications, the development of maritime ports and the second phase of the Hambantota Port Development project, and maintenance of the BMICH, at the meeting between Prime Minister D. M. Jayaratne and the Chinese Vice Premier Friday.