Sri Lanka is now one country, my aim is to see whole nation gets all benefits: President Rajapaksa 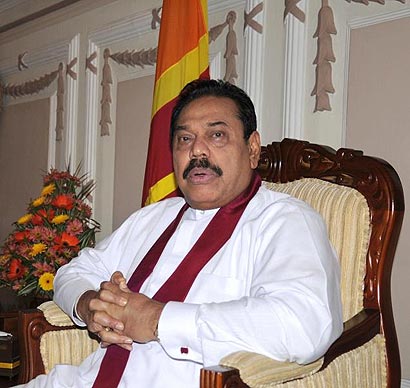 ‘I have a political solution in mind, it must be acceptable to political parties and the people’; TNA’s giving up separate state demand is ‘a very good development’; Tamil people ‘want a new leadership to be built up’; elections to Northern Provincial Council ‘by next year’; a priority is to ‘win the hearts and minds’ of the Tamil people.

During his first term, Sri Lanka’s President Mahinda Rajapaksa, underestimated by his political opponents and the outside world, achieved overwhelming political dominance after his politico-military strategy eliminated the LTTE as a military force and he went on to score two big electoral victories. As he embarks on a second presidential term, which began on November 19, he reflects on the tasks and challenges ahead in an interview given to N. Ram at Temple Trees in Colombo. This is Part I of the one-hour interview:

Mr. President, you made a huge score in the first innings. As you begin your second innings, there are heightened expectations from many constituencies within Sri Lanka and outside. How do you react to these?

As for what I achieved in the first term, I have brought peace to this country. Eliminated terrorism and brought peace. Now my aim is to develop the country. After that, the priorities are the people whom we have to win over — the hearts and minds of the people. Now Sri Lanka is one country; it’s not divided. So what we want is to see that the whole nation gets all the benefits, not only one area, not only one community. To develop the economy so that all the people benefit.

Earlier you spoke about the three Ds, Development, Democratisation, and Devolution. Has that changed?

No. Development is important. Without development and peace, we can’t have democracy. Democracy is very important because we are a democratic country. And then devolution: we have said we must know the minds of the people. Politicians have their own theories but people, the new generation, have different views. What we want is reconfirmation of what they want. Definitely we are going to have this. To have peace, we need all this.

How do you find the response of the people of Sri Lanka when you go to the rural areas? You won two big elections, the presidential election and the parliamentary elections.

When I go to villages and talk to the people, they are warm and friendly. I feel it.

You have no worthwhile opposition, politically speaking. Of course there are opposition forces. General [Sarath] Fonseka came into the picture and there are others. But after the elimination of the LTTE and after the electoral victories, I don’t see any leader in South Asia who is so well placed, so dominant politically as you are. How do you react to this? Do you sometimes feel complacent?

I must thank the people. In our democracy, people have trusted me to deliver. They know I have delivered peace to them. Now they need development and peace again. That is what the people expect from us. Now, with a two-thirds majority in Parliament, after a victory by 1.8 million — all this gives strength to me and to my party. What the people wish to have, we have to deliver.

On the Tamil question, the first challenge after the elimination of the LTTE was looking after 300,000 people who were in the camps. Now most of them have been sent back to their areas and I believe the number in the camps has come down to 18,000.

Of this 17,000 or 18,000, many of them are not in the camps; they go to the villages and come back. But at least 10,000 of them are from areas that have to be de-mined; we can’t send them there yet. But by December, we expect to send back everyone other than the people who wish to stay there [in the camps].

Are you satisfied with the resources that have come internally and externally to help this process?

I’m satisfied. Because all our friends helped us. Otherwise, we wouldn’t have been able to achieve this.

Now, there are heightened expectations about the political solution, the 13th Amendment-plus, that has been promised. The impression is that there is drift here.

As you would understand, we can discuss this only now — with all the political parties. After the elections, we have had discussions and they will continue. The solution that I have in mind might not be good enough for them; they might not accept it. Not only the political parties, the people must accept it. They want a new leadership to be built up. After we send them back to their villages, they have all these expectations and hopes. We must find out from them too. I have already had discussions with our political leaders who are in the government and who are in the opposition.

Do you have in mind a clear political solution, even if you have not revealed the specifics?

Yes, but I will first find out their views. We want to appoint a committee, from both sides and discuss all these.

Do you find the opposition reasonably cooperative, at least the main opposition, the UNP?

This is a principle you have followed throughout in your political career, when you were in the Opposition also?

Yes. I never went and tried to stop any aid or any benefits that we got! We never went on to that. We said, ‘yes, there are human rights violations,’ because I was the one who first went to Geneva and gave evidence in the Human Rights Commission. But we never tried to pressurise the governments to withdraw aid and benefits to the people of Sri Lanka.

It is notable that the Tamil National Alliance, or the people who are now the TNA, have for the first time said they would accept a devolution package within the framework of a united Sri Lanka. How do you see that?

You expect a lot from them?

Not only from the TNA but from all the Tamil parties. We need their support and the [Tamil] people’s support. This is very important. They must realise that they can’t get what Prabakaran wanted — by using guns and all those weapons, by terrorism. They can’t terrorise the country that way. They must also realise that what we refused to give Prabakaran, we won’t give to others. So they must be realistic — and fair, in this process. They must know the feelings of the others too.

The question is also about the sequencing: before you come to this political agreement, the search for a political consensus on the devolution package, why not hold elections in the Northern Province? But even the TNA doesn’t seem to be in a great hurry.

Yes, because at this juncture we have to re-settle these people first. They must be given their basic needs and provide for their livelihoods.

But they voted in the presidential and parliamentary elections even though they were in the camps. Do you have to wait for them to be completely re-settled now?

Everybody speaks about the tremendous infrastructural development in Sri Lanka, every part of Sri Lanka except the areas where de-mining is yet to be completed. So you have a very good thing going. Can’t the political process be speeded up to keep pace with this rapid development?

Unfortunately, the stakeholders were not available, some of them. When we start that [political process], the Opposition must cooperate. Everybody must agree to the solution — this is not my personal solution! It must be a solution of the people, a solution from the grassroots level — not imported, not imposed by force — it must come from them. This is the solution we want. Now they all want to be one country, one nation. I have been to the North, our young MPs also have gone. We have spent billions of rupees there. What we have spent on the Eastern Province and on the North, we have not spent on the other Provinces. If you compare that, we have invested massively in the North and the East.

I would say, very good. They have already given us an interim set of recommendations. I have given it to the officials to implement. A committee has been appointed. The commission is not meeting in Colombo only; they go to the North, they go to villages. They go and meet the people; they don’t wait till people come to them, they go to the masses. The difference is that. They have invited all international human rights groups to come and give evidence. They have sent invitations to the United Nations, so it can come and find out now. I think they are working very well, though some of the interested parties have their own views about the Commission.

You have the U.N. effort, the advisory panel that the Secretary General has set up despite opposition from the Sri Lankan government, and the demands of the NGOs for more investigations into alleged human rights violations. They don’t seem to have got anywhere.

I understand the plight of the NGOs. They have to say something. Whatever we do, finally we won’t be able to change their views — we might be able to change the views of a few of them but not all of them. They must realise that if you talk about other countries, conflicts are there, human rights issues are there. You can see the difference. For example, when all the 300,000 came this side and we started building some villages and kept them there, they said we were keeping them in ‘concentration camps’! You went there at that time, you could see for yourself whether they were concentration camps. When we re-settled them, they said ‘no permanent houses.’ Within six months, we have to build permanent houses. But without de-mining, how can we go and settle them? If we had settled them, they would have said we did this purposely to kill these people. We have seen some of these NGOs in Sri Lanka during election time. They went all out. One NGO, Transparency International, its local chapter, spent [SL Rs] 109 million in 2009, and within one month, the election month, January [2010], it spent [SL Rs] 69 million. A government department won’t be able to spend so much! This is what they did – got involved in local politics. They want to change governments, they want to change leaders. They don’t worry about the repercussions. Some of these NGOs are out; some of them are working.

[Part II of the interview will be published tomorrow.]

2 Responses to Sri Lanka is now one country, my aim is to see whole nation gets all benefits: President Rajapaksa

Home » Sri Lanka is now one country, my aim is to see whole nation gets all benefits: President Rajapaksa