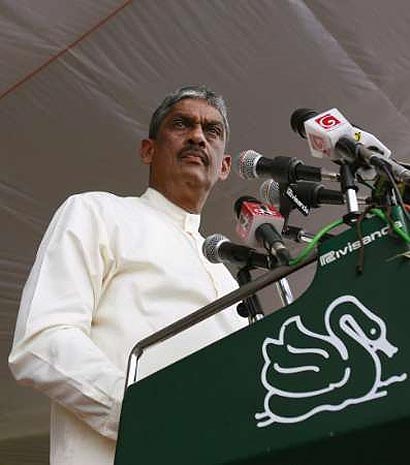 Retired general Sarath Fonseka, who led a campaign to crush the Tamil Tigers said a return of better governance would ensure the continuation of the generalized system of preferences plus (GSP+) trade concessions from Europe.

“I can confront and deal with any concerns and explain,” Fonseka said. “We need not hush up anything. Our hands are clean.”

He was addressing Sri Lanka’s business community along with opposition leader Ranil Wickremesinghe of the United National Party and Somwansa Amerasinghe from the Marxist Janatha Vimukthi Peramuna, ahead of presidential polls due later this month.

Exporters are due to lose trade concessions to Europe later this year over human rights violations and state denial of civil and political rights to the people set out in international conventions signed by Sri Lanka.

Sri Lanka’s exporters have been hard hit by a global slump and an overvalued currency from high inflation from 2006 which has ‘overvalued’ the rupee against currencies such as the US dollar.

UNP’s Wickremesinghe said there will be a more “flexible” rupee and help for exporters.

The ruling coalition has said that the pay hike would cost 132 billion rupees a year and has instead promised a 2,500 rupee hike, which would be a less of a burden on private citizens.

From 2004 Sri Lanka’s already bloated state sector has expanded by around 30 percent to 1.1 million workers. People outside the state, have for years contributed in taxes, inflation and currency depreciation to keep afloat a bloated state.

State enterprises also make large losses and are topped up by taxes collected from the people.

Fonseka said businesses were suffering high levels of taxes up to 64 percent and it would be brought down.

Fonseka is promising a new anti-corruption agency modelled in line with a UN convention against corruption to be set up by a caretaker administration he hopes to set up after coming to power.

He has also promised to implement and amended to the constitution and set up an independent constitutional council to free the public service from partisan political interference that has crippled state machinery.

According to Fonseka’s platform a bill proposing amendments to an existing constitution would also be put forward before parliamentary elections are held.