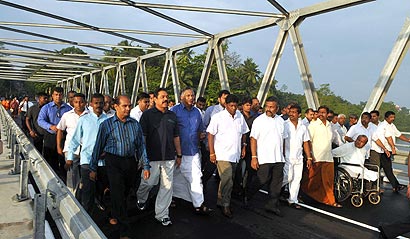 President Mahinda Rajapaksa inaugurated a bridge across the river at Hirana, Bandaragama and another flyover bridge at Pannipitiya this morning on 12th January. President Rajapaksa inspected the Bandaragama Bridge linking Hirana in Panadura and Kidelpitiya in Bandaragama and instructed to open it immediately for public use from today onwards. Later he inspected the Pannipitiya-Battaramulla flyover bridge which is constructed over the Pannipitiya railway track close to the High Level road and instructed to follow the same.

Pannipitiya flyover bridge which is 120 meters in length and consists of four lanes has constructed at a cost of 140 million rupees to minimize heavy traffic congestion in Kottawa, Maharagama, Kotte and the surrounding area. The two lane Bandaragama Bridge has been constructed through a loan of 757 million rupees from the Australian government.

President Rajapaksa visited these two locations with out prior notice and large numbers of people gathered to have a glimpse of the occasion. Several parliamentarians, local politicians and officials from the Ministry of High Ways were present at the inauguration ceremony.