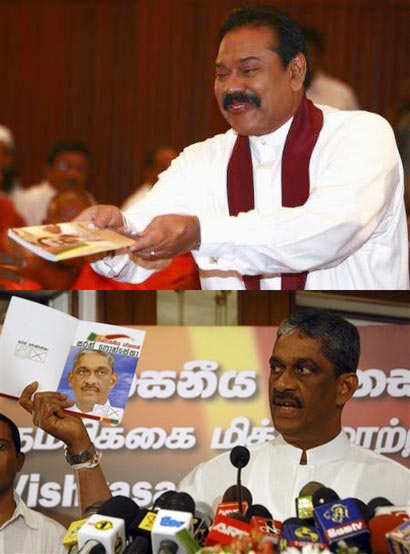 Source: AT – By Anjana Jayashan in Colombo

President Mahinda Rajapaksa Contesting For His Second TermPostal voting for the Presidential elections to elect the country’s sixth executive president will commence today and tomorrow (January 12 and 13), the Elections Secretariat announced.

A total of 401,118 are qualified for the postal voting and ballots papers are are already delivered by the postal department these days.

Elections Commissioner, Dayananda Dissanayake has given approval to the PAFFREL and CMEV to monitor the postal voting process to allay fears of malpractices.

These two bodies will monitor the marking of postal votes on January 12 and 13 for the sixth presidential election.

According to these sources, in addition to the two days set apart for postal voting, the postal voters would be granted a grace period up to January 26 12 noon. Any request to vote after that deadline would be turned down, sources said.

The Elections Secretariat also announced that they had to reject 57,036 postal voting applications being not in order. Applications for the postal votes were accepted from November 27, to December 07, 2009.

Returning Officers have already informed the certifying officers to make necessary arrangements at suitable places to cast postal votes. The Elections Secretariat further said that those who failed to cast their votes today and tomorrow will be facilitate to vote on January 26.

Arrangements for Voters in the North

In the meantime, the Commissioner of Department of Elections has made arrangements for voters in the north, including the Internally Displaced Persons (IDPs), to cast ballots in the Jan. 26 presidential election. This election is the first poll to be held for nearly three decades in Wanni and Killinochchi districts.

The Department of Elections, in an effort to familiarize voters in the north with election procedures, has expedited voter education efforts through Tamil language print and electronic media. The department has asked that all eligible voters register with the office of the government agent. As of 28 December, 35,783 applications have been received by the Department of Elections.

The department has also appointed an additional commissioner of election in Vavuniya to oversee electoral issues involving IDPs in the North.

Facilities will be provided to IDPs living in areas outside their electoral district to cast their votes at an alternate polling station.

The Department of Election will set up cluster polling stations with Tamil speaking election officials within the IDP welfare centers to accommodate IDP voters.

Under special circumstances, the Department of Election will provide transportation for voters in the North who are living outside their native electorate but who are eligible to cast their vote in their electorate.