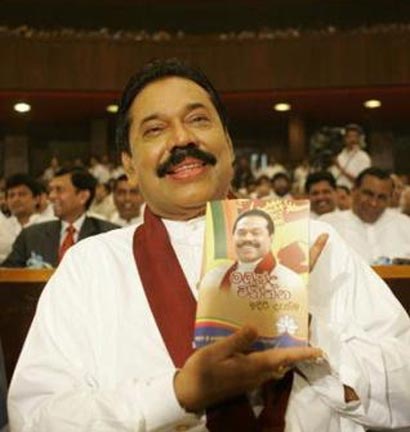 Sri Lankan President Mahinda Rajapaksa, seeking a second term two years ahead of his tenure in the election scheduled on January 26, on Monday morning unveiled a 14-point programme titled, `A brighter future’ with the promise to put Sri Lanka in a prominent position in Asia and the world and work towards a political solution to the ethnic question within a united Sri Lanka.

The manifesto aims to enhance the stature of the island nation with focus on new areas of development, after the successful military defeat of LTTE in May 2009, and the opportunities for investment and economic progress. The 2010 election manifesto of Mr. Rajapaksa is an expanded vision of `the Mahinda Chinthana’, the “Thinking of Mahinda”, the original manifesto issued by him in the run up for the first presidential election in November 2005.

With just over two weeks left for the date of polling and manifestos of the two chief contenders released, the campaign in the keenly contested poll gets into top gear. A few months ago, re-election of Mr. Rajapaksa was considered a foregone conclusion.

However, the emergence of the retired General as the rallying point for most of the Opposition parties has made the election a tough fight for the President. Since both the chief contenders are from the majority Sinhalese community, the focus would be on the choice of Tamil and Muslim voters who account for 25 per cent of the electorate.

Speaking at the launch of the manifesto, President Rajapaksa conceded that having to spend most of the four years of his first in term in fighting terrorism, and also the many international forces that sought to obstruct the efforts to defeat the most ruthless organisation in the world, he had barely six months left to address other important issues.

He promised that his next term would be wholly devoted to addressing these issues that would take the country to development and progress, giving priority to the battle against corruption with the same determination with which he had fought the underworld and terrorism.

He vowed to fight corruption and bring about development in the country and pledged to build a strong and healthy society. Stating that Sri Lanka was now a nation of one people, the President said he would soon hold the provincial election in the North to give power to the people over there to administer their needs. “I was in Jaffna, Vavuniya and the East during the weekend and people there were with all smiles indicated that the need was development”.

Mr. Rajapaksa also spoke in Tamil and said that he had destroyed terrorism and brought about peace in the country and people now are free to live in any part of the country. He also gave an assurance that the northern part of the island will be as developed in the due course of the time as the south.

On development, he went on to add that the Sri Lanka map was new with five ports coming up round the country.” We have started gigantic development projects in this country already and the people could reap benefits”, he noted.

The President said it was time to continue development that began four years ago and the next decade would be named the “Development Decade” of Sri Lanka.

He said the youth in the country valiantly fought the war to victory and he was confident that they would be partners in the development drive of the nation.

The President said he was a leader who stood against international pressure to protect the nation and warned that there were sections at present trying to give into terrorism again and urged the people to exercise caution. “These groups are trying to make way for another Elaam struggle in this country”, Mr. Rajapaksa told the gathering on the occasion.

Copies of the manifesto were first presented to the Maha Sangha and all religious dignitaries present on the occasion. All constituents of the ruling combine of the UPFA, his Cabinet colleagues, Prime Minister Ratnasiri Wickremnayake, Eastern Province Chief Minister Pillyan and Douglas Devanada, Social Welfare Minister and leader of Eelam People’s Democratic Party (EPDP) were present on the occasion.

These are the highlights of the manifesto:

* A prosperous country; a land of plenty

* A unitary state, not to be divided

* Respect for fauna and flora

* Entrepreneurs with strength to conquer the world

“We defeated terrorism and separatism, which outcome at one time was thought to be impossible. We are now ready to lead our children and our nation to a brighter future as stakeholders of a truly free motherland”, the manifesto says.