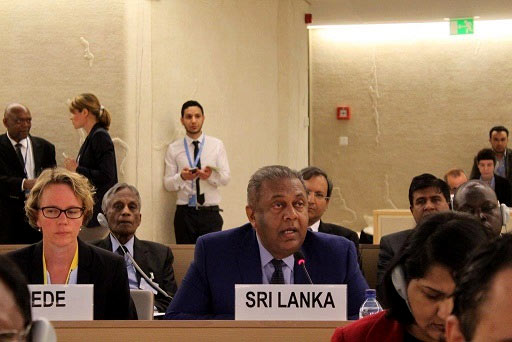 Sri Lanka’s new government said on Monday it was setting up a South Africa-style truth and reconciliation commission to look into atrocities during its civil war, as it came under renewed pressure to prosecute perpetrators.

South Africa, which confronted its own apartheid-era crimes through such a body, would advise the nation on how to use the commission to provide remedy to victims and to track down missing people, Foreign Minister Mangala Samaraweera said.

He outlined the plan, and other proposals to set up a criminal justice mechanism and compensate victims, to the U.N. Human Rights Council, hours after the world body announced it would release a long-delayed report on Wednesday calling for accountability for Sri Lankan war crimes.

Successive governments have promised to look into crimes committed by both sides during the 26-year conflict between government forces and separatist “Tamil Tiger” rebels.

According to an earlier U.N. report, around 40,000 ethnic minority Tamils were killed in a final offensive ordered by former president Mahinda Rajapaksa in 2009.

But world organizations have been frustrated by a string of failed plans and a lack of criminal indictments.

Samaraweera said the government planned an independent and credible “Commission for Truth, Justice, Reconciliation and Non-recurrence.

“The reputation of the vast majority of armed forces was tarnished because of the system and culture created by a few people in positions of responsibility,” he said, without elaborating.

Rights groups say Sri Lanka has failed to address continuing incidents of torture by the police and military against minority Tamils, whose leaders call for an international investigation.

“We will judge the government by the actions they take, not the promises they make,” Fred Carver, director of the Sri Lanka Campaign, told Reuters on Monday.

“The families of Sri Lanka’s dead and disappeared have waited years and in some cases decades for justice. This Council must not fail them,” said John Fisher of the New York-based group.

Within the commission, leaders from the island’s main religions would form a “Compassionate Council” to help victims “discover the truth, understand what happened and help remedy any sense of injustice”, Samaraweera said.

The United Nations was meant to release its report on Sri Lanka in March, but agreed to hold off for six months to let the new government look into why suspects had not been prosecuted.

President Maithripala Sirisena, who defeated Rajapaksa’s bid for a third term in January, has made tentative steps towards reconciliation at the head of a broad reform coalition.

U.N. High Commissioner for Human Rights Zeid Ra’ad Al-Hussein praised the government’s efforts but said it was time to publish the report whose findings were “of the most serious nature”.