Sri Lanka to be drug-free nation in two years – President 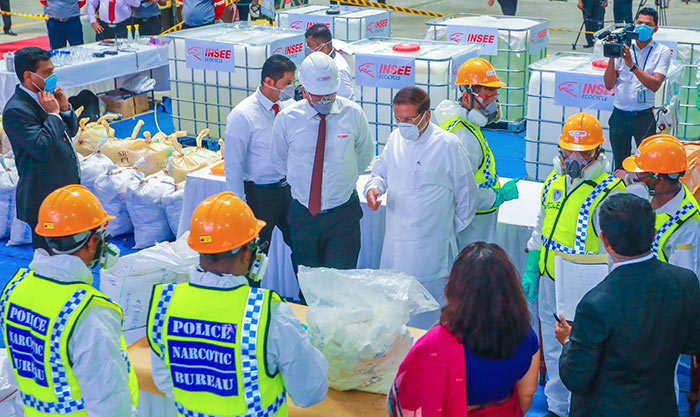 President Maithripala Sirisena addressing the media during the incineration of drugs at the warehouse facility in Kelaniya said that the inaction of the death penalty has led to the proliferation of narcotics in the country and that the list of those sentenced to death as well as the date of the first execution has been fixed.

“I am pleased that Sri Lanka is taking important strides in being a nation free from the drug menace. This is the first government to have initiated the incineration of drugs in full view of the public with approval from the courts. The first instance of which was held last year in January. The increase in drug addicts and detection also underscores the need for the death penalty,” he said, adding that the list of those who are sentenced to death has been finalized. “The date has also been fixed and it is a step that the country must take if it is to forge ahead.”

The President said that following the Sinhala and Tamil New Year, all law enforcement agencies, the Tri-Forces and other institutions such as the Customs will initiate a new programme that will see drugs being eradicated from the country entirely within the next two years.

“There are 150,000 drug addicts in the country and in the same enthusiasm that we have undertaken the responsibility of destroying it, we must also ensure that addicts are rehabilitated,” the President said.

“We will ensure that drug addicts are seen by a medical practitioner who will identify it as an illness and not a crime.”

He added that within the Asian region, South Asia is particularly riddled with drug menace and added that the lack of technological advancements is impediments to effective drug detections in the country.

“The Police, STF, Customs and Navy who are working together are conducting raids purely based on intelligence information. This is not so in other developed countries. Two months after I took over this ministry, I have decided that our officers should be equipped with the latest technology which will aid them in this pursuit.

“Within the next month, we will ensure that these technologies and equipments are available in Sri Lanka for law enforcement agencies and officers to use,” the President said.