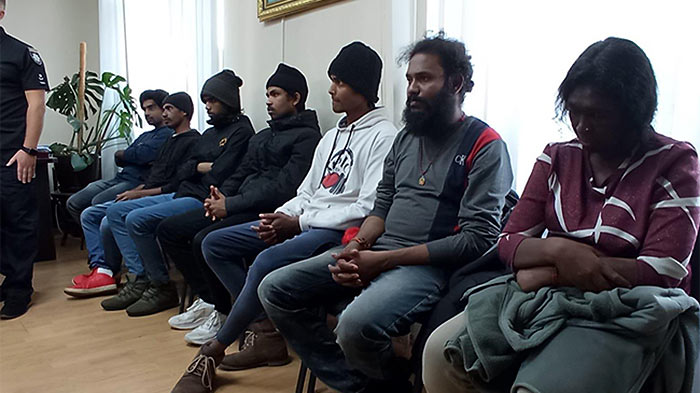 A Colombo-based human rights groups has called on the Sri Lankan government to do more and take responsibility for seven of its citizens who said they were captured and tortured by Russians in eastern Ukraine.

The seven, freed last month when Ukrainian forces retook the eastern Kharkiv region, recounted beatings and forced labour at the hands of their Russian captors. One of the victims was shot in the foot and another had his toe nail torn off.

“It’s the responsibility of the government to look into the well-being of Sri Lankans inside and outside Sri Lanka,” Ruki Fernando, human rights activist and consultant to the Centre for Society and Religion, told This Week In Asia.

“The foreign ministry and embassies, funded by Sri Lankan citizens, must contact them and do everything possible to ensure their rights, dignity and well-being,” said Fernando.

He said that based on available information, it appeared the government “has done very little to assist them”.
Fernando said the government had initially said they were looking into this, but government officials later told the media that the seven were illegal migrants and did not want to return to Sri Lanka.

In a press conference in Kharkiv a week ago, the Sri Lankans recounted their ordeal and said they were deeply affected and traumatised by what had happened and have not decided what to do next.
Most of the group hail from Jaffna city on the once war-torn peninsula. Four of them were medical students while the remaining three were migrant workers.

“Given most of them are Tamils from war-ravaged and highly-militarised northern Sri Lanka, and torture and other rights violations faced by Tamils in the north, it’s not surprising if they are not keen to come to Sri Lanka,” said Fernando.

The economic crisis, with food shortages and inflation of some 95 per cent, is driving many Sri Lankans to leave, said Fernando, both legally and illegally.

“It’s highly unlikely anyone, especially ones who have faced terrible ordeal like the seven, may want to return to Sri Lanka till things improve. The government must focus on providing assistance they request and must not try to get them to return without full informed consent,” said Fernando.

In a statement on September 17, Sri Lanka’s Foreign Ministry said it was in contact with the Ukrainian government through the Sri Lanka embassy in Ankara, which is concurrently accredited to Ukraine, as well as through the Ukrainian embassy in New Delhi, to obtain further information on this matter.
The ministry had facilitated the return of over 90 Sri Lankans, including 16 students living in Ukraine, between February and June 2022.

Ukraine’s Deputy Interior Minister Yevhen Yenin told This Week In Asia that the atrocities committed against the Sri Lankans reflected the “low level of education and culture” of the invading force.

In an interview via Zoom, Yenin described the conditions of the detention rooms where the Sri Lankan citizens were held as horrific and extremely indecent. “I went there to see the place myself,” said Yenin.
“It is difficult to explain the level of cruelty and atrocities used by Russian soldiers. Maybe somehow this is connected to their living standards,” said Yenin.

He said large numbers of the Russian soldiers come from remote regions with low levels of education and cultural values.

Four of the seven Sri Lankans were medical students in the city of Kupiansk and three were working there when Russian forces crossed the border in late February and occupied large swathes of eastern and southern Ukraine.

When the Russians came, the Sri Lankans tried to escape to Kharkiv but were stopped at the first Russian checkpoint out of Kupiansk. They were taken to Vovchansk, near the border with Russia. “Every day, they tortured us,” said 25-year-old Dilukshan Robertclive.

The group was held in an agricultural factory with 20 to 25 Ukrainians. The six men were held in an upstairs room while the woman was held in a dark cell alone.

“Every day, we were cleaning toilets and bathrooms,” said Dilukshan, adding that there were days when they had to clean the Russian army’s “drinking places”.

Serhiy Bolvinov, head of the investigative department of the National Police in Kharkiv, said the factory housed a Russian “torture centre”.

The Russians had also asked for money from the Sri Lankans.

The group recounted that when the Russians spoke with them and they replied that they did not understand their language, they got beaten up.

The group said they received food twice a day. “A little bit of food – (it was) a little bit of macaroni, two (slices of) bread, a little soup,” said Dilukshan.

Dilukshan said the Sri Lankans were usually the last in the line for food and the food ran out on some days by the time they got to the front of the queue. They were only allowed to take a shower every five days.

On September 10, the Ukrainians entered Kopiansk. When the Russians left, the Sri Lankans escaped by foot.

Sharujan Gianeswaran, speaking in Tamil to an AP journalist by phone, said they were on the road for two days and were exhausted and hungry.

Someone finally provided shelter after two days and called for a ride from security forces. Police said the group was picked up in the Chuhuiv area, about 70km from where they started.

The Sri Lankans are not the only foreigners who were captured by the Russians in the territories which they occupied.

Ukrainian Deputy Interior Minister Yevhen Yenin said that the authorities had come across other foreigners. “We try to provide them with basic medical and psychological treatment … we make it public,” said Yenin, warning that Russians would treat foreigners with the same brutality that they meted out to Ukrainians.