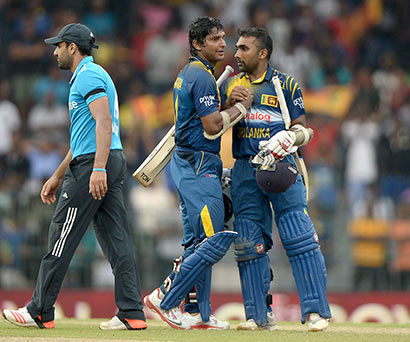 Sri Lanka beat England by eight wickets in a rain-reduced one-day international to take a 2-0 lead in the series.

Alastair Cook won the toss but he and the top order struggled against the spinners on a slow Colombo pitch.

The hosts lost two early wickets but veterans Kumar Sangakkara (67 not out) and Mahela Jayawardene (77 not out) saw them home with 10.4 overs to spare.

In the end, it was a comfortable chase for the experienced batting pair, who added 149 and have amassed a mammoth 815 ODI caps between them.

When the weather relented to allow play to begin, both sides – wearing black armbands – stood in silence to remember Australia batsman Phillip Hughes, who died on Thursday after he was hit by a ball while batting in a Sheffield Shield game.

On a used, tacky pitch, boundaries were at a premium, with only eight coming in the entire England innings, in stark contrast to the boundary blitz happening simultaneously in the third Test in Sharjah as New Zealand feasted on Pakistan’s bowlers.

Off-spinner Tillakaratne Dilshan struck in the second over as Moeen Ali was bowled off his pad trying to hit him through the leg side.

Ian Bell, playing his 150th ODI, came down the pitch three times to the spinners, but holed out at long-off on the third occasion, while Cook (22) top-edged a sweep to deep backward square leg.

Meanwhile, Root was fortunate to survive an lbw appeal from Dilshan on 16 when the ball-tracker was millimetres away from overturning the umpire’s “not out” decision after Sri Lanka reviewed it.

After strangling England with 14 consecutive overs of spin, it was then the turn of Sri Lanka’s seamers to strike as Thisara Perera’s third ball was hit straight to short extra cover by the out-of-sorts Eoin Morgan, who is without an ODI fifty since January.

Angelo Mathews’ bowling changes continued to bear fruit as the skipper returned to trap Root lbw trying to heave a straight ball to leg, while paceman Dhammika Prasad – kept back until the 32nd over – bowled Jos Buttler via an inside edge.

Although Bopara recorded a third half-century in four ODIs, spinner Ajantha Mendis (3-33) wrapped up the innings with two overs to spare.

With the death of Hughes still in the minds of many spectators, Sri Lanka’s spin-dominated attack meant that short-pitched deliveries were a rarity in any event, the first arriving in the 28th over of England’s innings.

By contrast, two of Finn’s first three deliveries were bouncers – but both were hit for four by Dilshan, who picked up three boundaries from the first over to get the hosts off to the proverbial flying start.

The short ball did pay off for Finn as he tucked Kusal Perera up for room and forced him to chip a catch to square leg, while Moeen induced a leading edge from Dilshan.

But the longer England went without breaking the Sangakkara-Jayawardene stand, their 15th century partnership in this format, the result was increasingly a foregone conclusion, with England’s bowling unit seemingly unable to exert any pressure.

The next match in the seven-game series is at Hambantota on Wednesday. 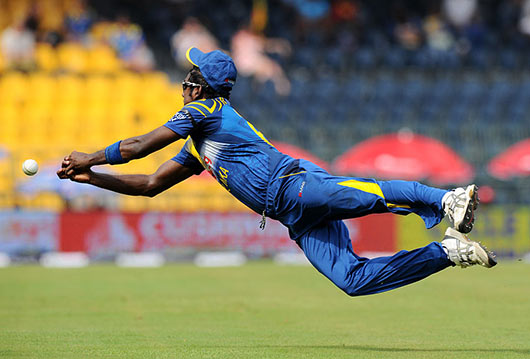 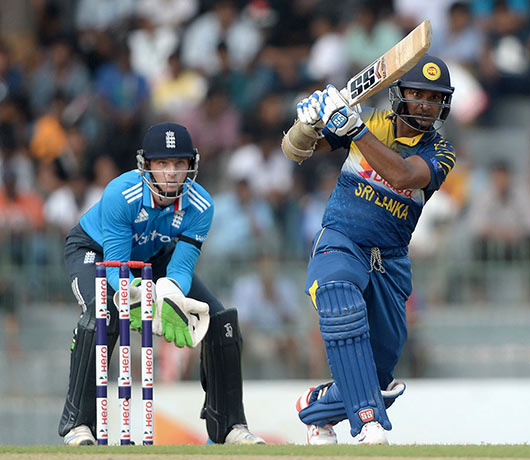