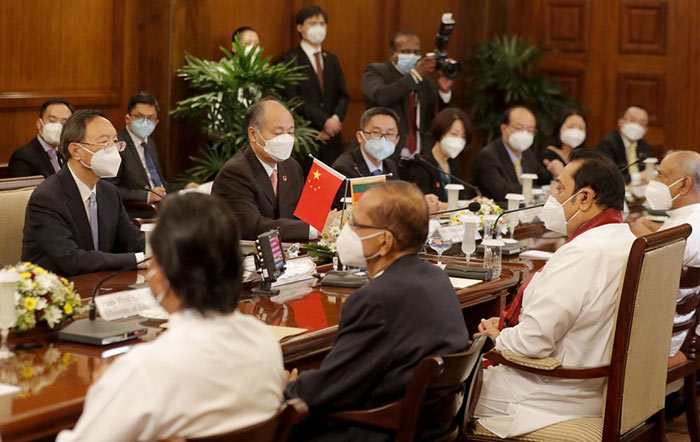 Sri Lanka’s president asked a visiting delegation led by a senior Chinese diplomat on Friday to assist him in disproving a perception that China-funded megaprojects are “debt traps” aimed at gaining influence in local affairs.

President Gotabhaya Rajapaksa made the request to the delegation led by Yang Jiechi, a Communist Party Politburo member and former foreign minister.

China considers the Indian Ocean island nation to be a critical link in its massive “Belt and Road” global infrastructure building initiative and has provided billions of dollars in loans for Sri Lankan projects over the past decade. The projects include a seaport, airport, port-city, highways and power stations.

During their talks, Rajapaksa hailed Chinese assistance in upgrading infrastructure facilities and said the seaport in the island’s south had been proposed by the Sri Lankan government and funded by China.

“Many geopolitical analyses interpret this project as a ‘debt trap’ set up by China to gain control over Sri Lankan affairs. I want to prove that it is not the case and that this large-scale project will help improve the living standards of the people. Assist us in this endeavor,” Rajapaksa told the delegation, according to a statement released by his office.

The statement did not explain what help he sought from China.

Critics say the Chinese-funded projects are not financially viable and Sri Lanka will face difficulties in repaying the loans.

In 2017, Sri Lanka leased out the Chinese-built port located near busy shipping routes to a Chinese company for 99 years to recover from the heavy burden of repaying the Chinese loan the country received to build it.

The facility is part of Beijing’s plan for a line of ports stretching from Chinese waters to the Persian Gulf. China has also agreed to provide a $989 million loan to Sri Lanka to build an expressway that will connect its tea-growing central region to the Chinese-run seaport.

China’s economic influence over Sri Lanka has worried its closet neighbor, India, which considers the Indian Ocean region to be its strategic backyard.

Yang’s visit comes days after the top diplomats of four Indo-Pacific nations – the U.S., Japan, India and Australia – met in Tokyo to increase their involvement in a regional initiative called “Free and Open Indo-Pacific” aimed at countering China’s growing assertiveness in the region.