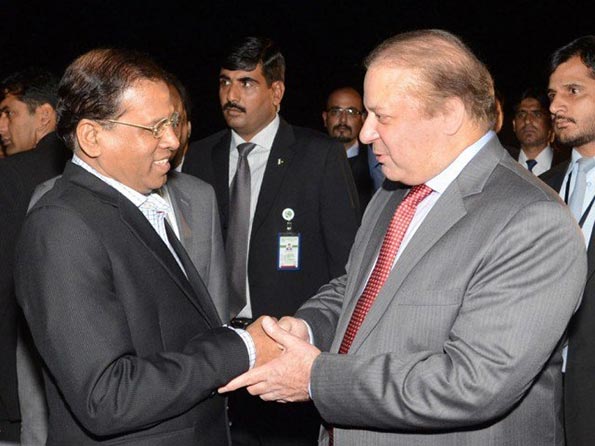 Mr Sirisena’s visit is his first to Pakistan, on the invitation of President Mamnoon Hussain and Prime Minister Nawaz Sharif.

The PM received the Sri Lankan president and his delegation at the Nur Khan Airbase. Special Assistant to Prime Minister on Foreign Affairs Tariq Fatemi and other top officials were also present.

On his arrival, a 21-gun salute was presented to the Sri Lankan president and first lady. President Sirisena first landed at Jinnah International Airport in Karachi, where he was received by Sindh Chief Minister Syed Qaim Ali Shah and senior officials. After a brief stopover, he left for Islamabad on a special Pakistan International Airlines flight.

Mr Sirisena will meet President Mamnoon Hussain at the presidency on Monday, where a state banquet will be hosted in honour of the guest.

The prime minister will hold official talks with President Sirisena and a number of MoUs and agreements of cooperation in various fields will be signed.

Being members of South Asian Association for Regional Cooperation and Commonwealth, Pakistan and Sri Lanka cooperated closely in the past.

Pakistan and Sri Lanka have a strong relationship based on defence cooperation.

Officials said that now both countries would be striving to build trade and economic relations with each other.