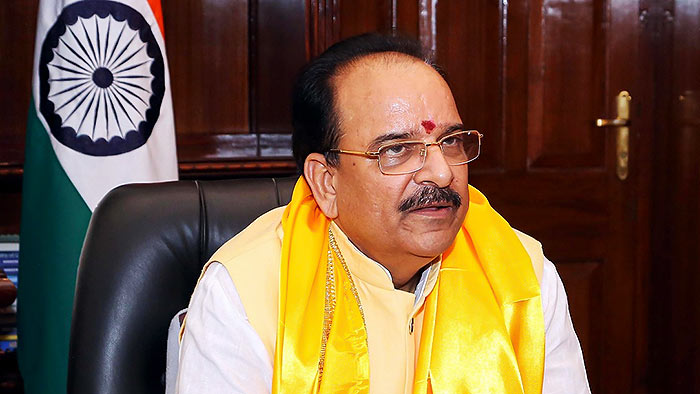 India’s Minister of State for Defence and Tourism Ajay Bhatt

Emphasising on the need to attain self-reliance, India’s Minister of State for Defence and Tourism Ajay Bhatt said Sri Lanka was in such a bad economic crisis that its security forces were unable to pay the nominal fees for training exercises in India.

Bhatt, who was speaking at a session on ‘AatmaNirbharta in Defence R&D – Synergistic Approach’ at the DefExpo at Gandhinagar on Thursday, also hailed India’s stand on the Russia-Ukraine war. All students, along with their pet animals, who were stuck in the crossfire were rescued safely due to India’s position, he said.

Citing the Sri Lankan example to show the damage a dependent democratic country can suffer, Bhatt said, “When the management (of a country) is not right, it becomes like Sri Lanka… owing to the poor economic situation, they had to ask for aid (from other countries). The saddest part was their (Sri Lanka) Army officers who came for training (in India) did not even have the means to pay for the nominal fee. They requested that the fee be adjusted this year and (said) would pay next year when they may have the money.”

Stressing on being ‘AatmaNirbhar’ (self-reliant) as a nation, a feat that he claimed India has achieved in “every arena”, Bhatt said, “Our economic situation is so strong that we can feed ourselves comfortably for a year (if faced with a crisis). We have become self-reliant in every arena and it is not a small thing. If God wills, we will lead the world.”

Referring to India’s position during the Russia-Ukraine war, the Union minister said, “We evacuated so many people. Usually in war situations even the rescuers can be affected but…. we brought 22,500 students safely with their pet dogs and cats back here to India.”